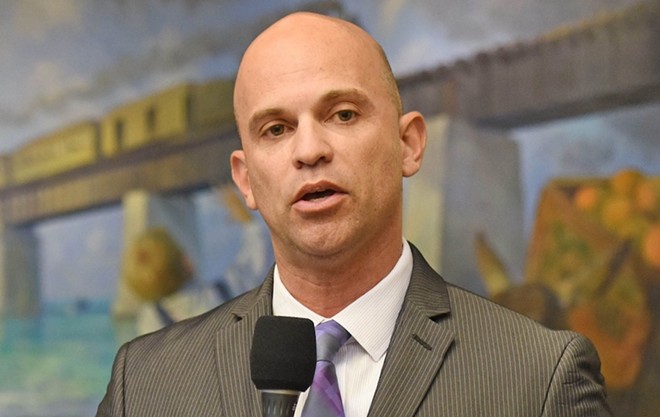 The bill was proposed by Rep. Rene "Coach P" Plasencia, R-Orlando, on Monday to the Orange County Legislative Delegation, and passed 9-0. The bill will allow an exemption from current general law for smaller restaurants in certain areas to obtain a liquor license at a much lower cost.

College Park, Audubon Park, Ivanhoe Village, the Milk District, Mills 50 and the Gateway District are all listed in the bill for the exemptions.

"Many of the old buildings are being renovated and turned into restaurants," Plasencia said to the delegation Monday.

"Just because it's built small, it [the law] shouldn't preclude it," Plasencia said in a phone interview with Orlando Weekly Tuesday, referring to older properties being repurposed as restaurants.

Currently, restaurants must be at least 2,500 square feet and able to serve a minimum of 150 patrons to obtain a license to serve liquor on their premises, and it will generally cost around $2,000, Plasencia said in the phone interview. He said his bill will lower the thresholds to 1,800 and 80, respectively, and allow for more small businesses to qualify.

It follows the style of one passed in 2018 for the Orlando downtown area, which reduced the thresholds the same way.

Reps. Travaris "Tray" McCurdy and Anna Eskamani, both D-Orlando, expressed concerns in the Monday meeting that the bill should be more inclusive than just those neighborhoods listed. Several of the neighborhoods in the bill are in Eskamani's district, while none are in McCurdy's.

"The line that divides my district and McCurdy's district is a line of 'majority-minority' community, that also should be able to partake in any type of expansions that Orlando wants to pursue," Eskamani said.

Plasencia committed to McCurdy that language would be added to include other areas that meet the same designation as the ones listed, once the bill passed with the delegation. In the interview Tuesday, Plasencia said he found out Tuesday morning from the city that the 2018 bill covers some of McCurdy's district, including areas in Parramore.

Plasencia said he would confer with McCurdy to see if the 2018 bill met those concerns, and if not, would go from there. He said his commitment is that the bill reflects McCurdy's district's concerns.

"I just want to be respectful to Rep. McCurdy," Plasencia said. "I'd make changes to do the right thing."

Plasencia said Monday that his bill would allow the law to fit the history and architecture of the listed areas. In the Tuesday interview, he said Rep. Thomas Leek, R-Ormond Beach, called and asked Plasencia if he could expand the bill to include the entire state.

Plasencia said he was interested in exploring and learning more about the effects of implementing his bill statewide, but wants to make sure there are no unintended consequences in doing so.

"A lot of older places in the state of Florida could benefit," Plasencia said, "if they don't already have their own local bill."