From Orlando’s Epic Universe to Hong Kong’s Ocean Park, theme park projects worldwide have been delayed, canceled or changed dramatically due to COVID-19, but in Japan, one park is pushing forward. The Ghibli Park in Aichi Prefecture remains on track for a 2022 opening of its first phase, just a year later than originally planned. The park will feature five zones, each themed to iconic scenes or concepts from Studio Ghibli films.

While billed as a theme park, the project is best understood as a collection of pavilions within a pre-existing park developed as the site of the 2005 World Expo. The expo saw Satsuki and Mei’s House from My Neighbor Totoro built in the forest zone. While most of the expo’s buildings were designed to be temporary, the house has remained. Now the 460-acre urban park will become a celebration of Studio Ghibli, the most popular animation studio in Japanese history.

In keeping with the previous World Expo's ecological theme, the upcoming Ghibli Park will not cut down any trees within the park. The park is designed to be a guide for more environmentally sensitive tourism developments.

The limited areas for development hasn’t stopped the $323 million park from planning major projects. Guests will enter through the Springtime of Life Hill. This land, also known as Youth Hill, will house an observation elevator inspired by Castle in the Sky and Howl’s Moving Castle. Like other buildings on the site, the observational elevator tower is a remodel of an existing building.

No theme park is complete without a gift shop. At Ghibli Park, the gift shop from Whisper of the Heart will also be realized at Youth Hill. Other sites in this area include the cat office from The Cat Returns. 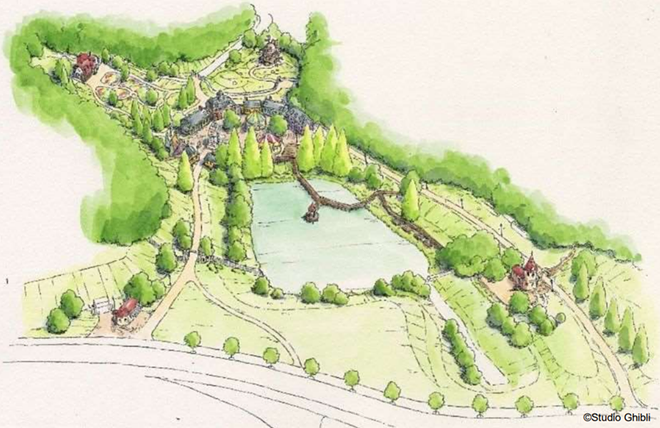 A five-story replica of Howl’s Moving Castle will anchor Witch Valley. Inside the castle, guests will also be able to explore Howl’s bedroom. This land will also have a recreation of Kiki and her parents' home from the film Kiki’s Delivery Service. Concept art for this land shows a small teacup-style flat ride. Other rides and walk-through attractions are also planned in this area. Witch Valley sits on the shore of a small lake, similar to the sites in the films the land is based on. 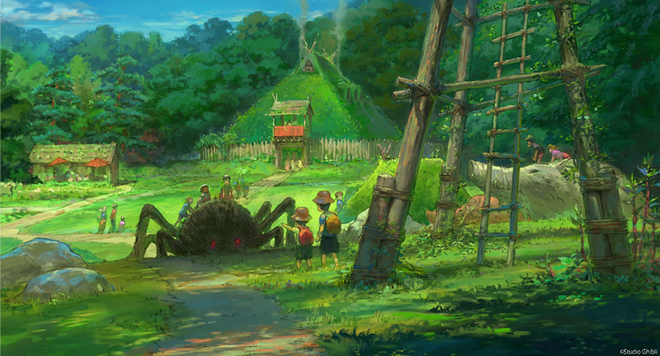 Princess Mononoke Village will be an authentic Muromachi period village with a charcoal burner’s cottage. Charcoal grilling demonstrations already occur in this area, using pine cones and vegetation found within the park, but it will be reworked to match the film's settings. Giant sculptures of the spirits and creatures from the film will be found throughout the village.

The existing My Neighbor Totoro house and forest will remain mostly as they are, with winding walking trails through the lush forest.

The final section of the park will be known as Ghibli’s Giant Warehouse. It will offer multiple stores, attractions, and experiences inside the existing heated pool building. A food hall-style eating area themed to the restaurant district in Spirited Away, a 170-seat theater, and various galleries featuring rotating displays related to Studio Ghibli will all be found in this multi-level indoor area. The 103,000 square feet ‘warehouse’ will take multiple hours to fully explore. This indoor land will house.

As a whole, Ghibli Park showcases what a community can do with a public venue once the primary use is no longer relevant. Across the world, former spaces used in global events like the Olympics, World Expos, and World Cups sit abandoned. Los Angeles is currently grappling with how to design its Olympic Village in a way that can be easily retrofitted for future uses after the 2028 Olympics take place.

The problem of underutilized venue spaces plagues even smaller communities, with dozens of abandoned racetracks and sports venues causing blight while serving as a reminder of what once was. Other cities, such as Denver, are looking at how to redevelop urban sites that were once hotspots for tourists. 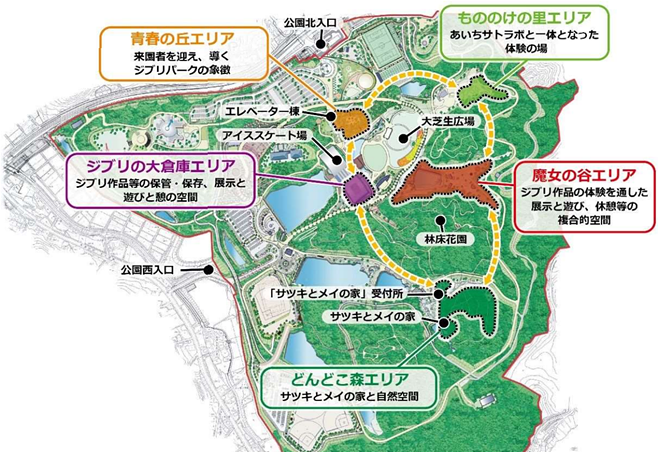 The Ghibli Park is the bold evolutionary step that began with a single house on the site. With a theme in place, existing buildings and infrastructure are being reimagined in a unifying way. Many facilities, such as the elevator tower and the charcoal center, will keep their current uses. But with this new overlay, the park can be marketed to brand-new audiences. The project is expected to attract more than a million visitors a year and will serve as a major economic driver for a community where few tourist attractions currently exist.

As tourism prepares for the Roaring '20s predicted post-pandemic, this forested urban park from a mostly forgotten world expo may pave the way for a more sustainable path for future tourism developments.

Ghibli Park is slated to open in phases beginning next year. The full park will be opened by the end of 2023. 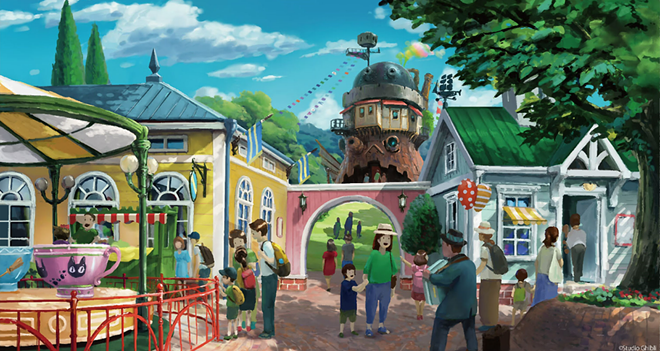