Move over, Mandalorian — Disney's next hit TV series could be based on the Magic Kingdom

With the cinematic universes of Star Wars and Marvel proving pivotal to the early success of Disney+, the company is now looking at how to bring new franchise universes to life, and that may entail tapping into one that began inside Disney theme parks. According to The Hollywood Reporter, Disney is looking at using the fictional Society of Explorers and Adventurers as the premise of a new television franchise.

The Hollywood Reporter story points to Ron Moore as the writer and executive producer for the new franchise. Starting with a single series, S.E.A. will eventually become a full Magic Kingdom-inspired cinematic universe similar to how Marvel now includes multiple films, television series, and books all intertwined within a single reality. Moore is best known for his work on the Battlestar Galactica reboot and numerous Star Trek projects, both of which were developed within similar overarching cinematic universes.

Bob Chapek, at the time the Disney Parks and Resorts President, spoke at a Disney fan event in 2016 where he claimed references to the Society of Explorers and Adventurers would become stronger at Disney parks in the future. The rollout began a few years prior to Chapek's comments but since then the number of references has dramatically increased. Chapek, now CEO at Disney, is known for his adoration of synergy and embrace of Disney-owned content, so it makes sense that a unifying franchise like S.E.A. would appeal to him. 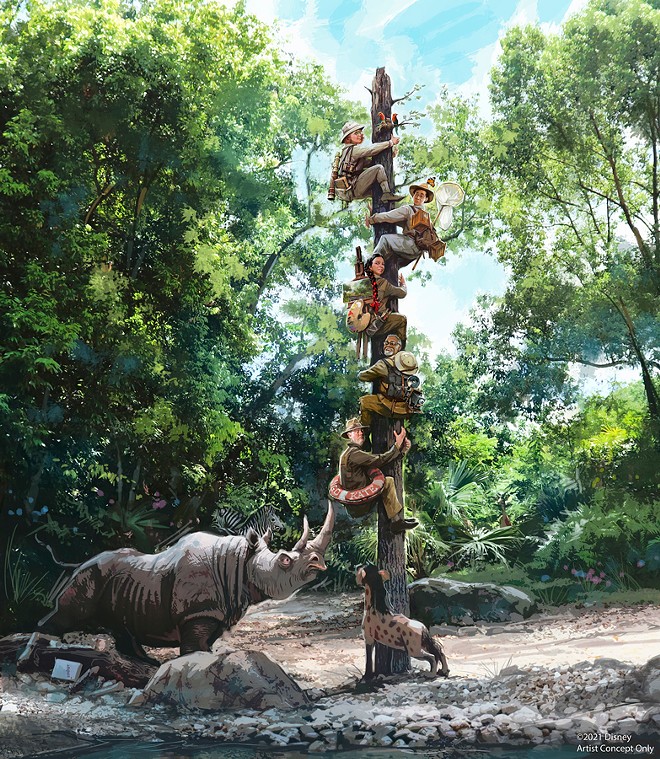 First introduced in 2001 at Tokyo DisneySea, S.E.A has rapidly expanded and now has a presence at nearly every Disney theme park. Based loosely on Disney World’s former Adventurer’s Club, the fictional society had a small presence in a walk-through attraction at Tokyo DisneySea. In 2006, when the Tower of Terror opened at the Japanese park, S.E.A. was used instead of the Twilight Zone, which isn’t as well known in the country. When Hong Kong Disneyland’s Mystic Manor, their trackless Haunted Mansion style dark ride, has heavy references to the organization. That 2013 attraction is viewed as the launching pad for S.E.A.

Some items from the former Adventurer’s Club can be seen in attractions worldwide, with the shuttered comedy club’s official history being revised to include it in the society via a membership by Pleasure Island’s founder, Merriweather Pleasure. Even the cruise line has gotten in on the action with the onboard youth club, the Oceaneer’s Lab, having references to S.E.A. member Mary Oceaneer. Other references to Oceaneer, and her pet parrot, can be found on Castaway Cay, in Magic Kingdom’s Jungle Cruise-themed restaurant Skipper Canteen, and at Typhoon Lagoon. Other notable members include Jock Lindsey, from Indiana Jones and the Disney Spring’s bar, Big Thunder Mountain Railroad’s Barnabas T. Bullion and Jason Chandler, Jungle Cruise’s Dr. Albert Falls, and Harrison Hightower III, who has a striking resemblance to real-life retired Disney Imagineer Joe Rohde.

Altogether, nearly 18 fictional characters have been developed as part of the expanding society with references to it now included on more than half a dozen rides and at every Disney resort except for Shanghai, where the potentially related League of Adventurers can be found.

This isn’t the first time Disney has tried to cash in on its in-park properties. The company saw huge success with the Pirates of the Caribbean films and are now actively working on rebooting that franchise. There’s also the upcoming Jungle Cruise film, starring Emily Blunt and Dwayne Johnson, which is expected to spur multiple sequels. On Disney Junior, the popular Miles From Tomorrowland was loosely based on the theme park land found at numerous Disney castle parks with references to the Tomorrowland Transit Authority.

Not all of the attempts have been as successful as Miles From Tomorrowland and Pirates of the Caribbean. In 2013, a Big Thunder Mountain-inspired television series pilot was ordered by ABC, but the series never made it past the pilot. There’s also the Tomorrowland film, designed to provide a backstory and unifying aesthetic to the theme park lands of the same name. Despite the impressive cast, the film was a major flop, causing an estimated loss of more than $120 million.

The Society of Explorers and Adventures series sounds similar to another canceled Disney+ series, based on the Kingdom Keepers books. Like the books it was based on, that series features various Disney attractions ‘coming alive’ after the parks close, similar to the Night at the Museum films. According to comedian Kevin Smith, who was overseeing the show’s writing, it was ultimately canceled due to the multiple intellectual properties used within it. That explanation seems incomplete, considering Disney has done similar things with its Once Upon a Time television series.

Disney may have canceled the series due to its similarities to Night at the Museum, which it now owns, thanks to the Fox buyout. An animated series based on the film trilogy is now in the works for Disney+. The rumored S.E.A. series also bears many similarities to Kingdom Keepers, but allows for a wider expansion of the cinematic universe by divorcing the series from the present reality of Kingdom Keepers.

No timeline for the S.E.A. series has been revealed. Disney has yet to confirm the series, but at an investor day event in late 2020 they confirmed that more than 35 new series will be coming to the company's streaming platform in the next few years.