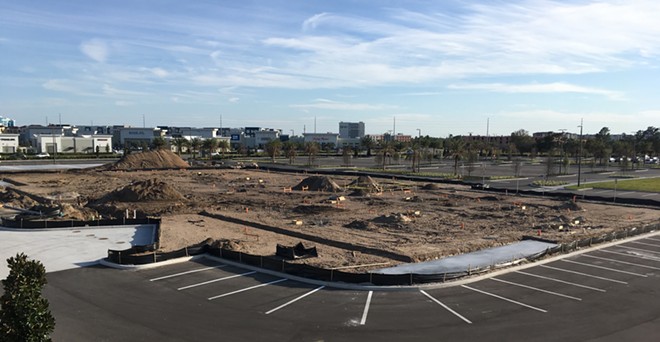 “Remember the Alamo” will now haunt Orlando almost as eerily as it does San Antonio, after Texas-based movie theater chain Alamo Drafthouse today announced it's scrapping plans for an Orlando theater. The cancellation is part of a pending Chapter 11 bankruptcy and sale to its senior lender group.

Alamo Drafthouse, founded in 1997, had planned to open its first Florida location last fall. Construction of the dine-in cinema began about a year ago at the intersection of Daryl Carter Parkway and Regency Village Drive, as part of the Vineland Pointe shopping and dining center, about two miles southwest of SeaWorld. But the pandemic, and now the bankruptcy and sale, have permanently ended those plans. The company also plans to permanently close three existing theaters: the historic Ritz in downtown Austin, Texas, plus a cinema in Kansas City and one in New Braunfels, Texas. But the overall company hopes to survive and prosper.

“We’re excited to work with our partners at Altamont Capital Partners and Fortress Investment Group to continue on [a] path of growth on the other side of the pandemic,” said Alamo Drafthouse CEO Shelli Taylor in a prepared statement. “And we want to ensure the public that we expect no disruption to our business and no impact on franchise operations, employees and customers in our locations that are currently operating.”

The Orlando cinema was to have had 10 screens, with a total of 942 seats, according to the company’s original announcement in 2019, as well as the ability to project 35mm film.

Perhaps John Greenleaf Whitter said it better than any press release: “Of all sad words of tongue or pen, the saddest are these: ‘It might have been.’”