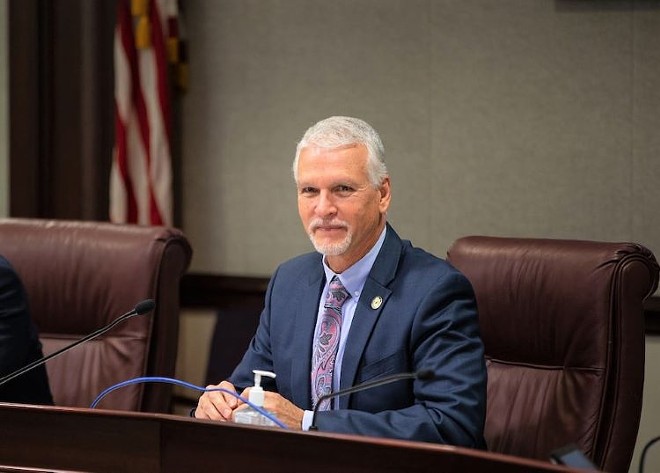 A Republican senator has proposed a bill to reinstate gun rights to nonviolent felons who have completed their sentences.

Sen. Keith Perry, R-Gainesville, filed SB 1932 at the start of the new legislative session on March 1. The bill would amend Florida statute 98.0751 to reinstate the civil and firearm rights of felons who have completed all parts of their sentence — time served, probation and legal financial fees — so long as they were not convicted of a violent crime.

In an interview with Orlando Weekly on Monday, Perry said his bill would expand on the Amendment 4 vote from 2018. Perry said he has been told by multiple people that recidivism rates go down when civil rights are restored.

"If we can reduce recidivism rates, there's less victims of crimes," Perry said, "and public safety should be a paramount issue in Tallahassee."

Perry said he has had people with prior convictions who have served their time say they still feel as though they are being punished.

"They still feel excluded from the community," Perry said.

Related Florida's landmark voting rights amendment was gutted by the Legislature: Only a small percentage of returning felons will be able to vote, and some may face prosecution if they do

Florida's landmark voting rights amendment was gutted by the Legislature
Only a small percentage of returning felons will be able to vote, and some may face prosecution if they do
By Lawrence Mower and Langston Taylor, ProPublica
News

Neil Volz, deputy director for Florida Rights Restoration Coalition, said that they know it's important for returning citizens to connect with their community to prevent repeat offenders. But, he said, it's hard to do that when returning citizens are handicapped by their lack of rights.

"You realize there's a cap [on how far you can go]," Volz said. "This is about restoration."

Perry said the 2018 vote gave these citizens back their right to vote, but not all of their civil rights.

"I don't see any justification on why someone with a nonviolent conviction from 20 years ago … can't go hunting with their son," Perry said.

Volz said the FRRC supports the spirit of the bill.

"We believe that returning citizens should be treated just like everyone else," Volz said.

The FRRC is an organization for and mostly run by former felons; Volz said he himself served time, as has Desmond Meade, the FRRC president. Volz said their organization works to restore civil rights to returning citizens.

"We look forward to working with Sen. Perry to expand who has their civil rights restored by this bill," Volz said.

Perry said that he has worked to help returning citizens for over 25 years, through his work with House of Hope, a transitional housing service, and his own roofing contractor business. When asked why prioritize gun rights over helping former felons with access to jobs and housing, Perry said they were working on both.

"They're not mutually exclusive, you need to do both of those," he said. "We're fighting those every day."

FRRC has already had great success in restoring a major right to returning citizens: the right to vote. In 2018, FRRC pushed for Amendment 4, which Floridians voted into law that year.

"Fifty-two thousand returning citizens who were not eligible to vote in 2018 voted in 2020," Volz said. "Including me."

The bill, while restoring their firearm rights to many returning citizens, will still block any with violent convictions.

The bill defines that phrase, and thus precludes felons convicted of committing or conspiring to commit the following crimes: leaving the scene of a crash involving death or serious injury; driving under the influence resulting in death or serious bodily injury; failing to register as a sexual predator or offender; facilitating or furthering terrorism; abuse, aggravated abuse, or neglect of an elderly or disabled adult; poisoning food or water; offenses requiring someone to register as a sexual offender; and others.

Volz said that the bill is only at the beginning of its legislative process, but that they will engage it every step of the way.

"This kind of give-and-take of public debate is what we fought so long to be a part of," Volz said, "and we believe in the principles of the full empowerment of returning citizens in Florida."

As of March 4, the bill has been referred to the Judiciary, Criminal Justice and Rules committees. Should the bill pass through the many hurdles of state congress, it will go into effect July 1.