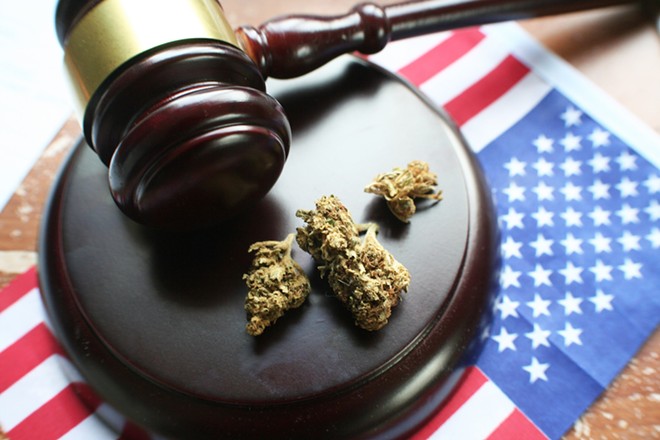 With Democrats condemning the effort as “reefer madness,” a House panel on Tuesday pushed forward a proposal to impose limits on the amount of euphoria-inducing THC in medical marijuana products.

The proposal, approved in a party-line vote by the House Professions & Public Health Subcommittee, would place a 10 percent THC cap on smokable marijuana and limit THC levels to 60 percent in most other medical-marijuana products. THC, or tetrahydrocannabinol, is the main psychoactive component of marijuana that makes users feel high.

Floridians approved a constitutional amendment in 2016 that broadly legalized the use of medical marijuana for patients with certain conditions. More than 500,000 Florida residents have been authorized by doctors to use the treatment, and the number of patients continues to climb.

“Doctors and patients are taking advantage of our medical marijuana program to do two things —- to get rich and get high, period,” Roach told the House panel.

Roach urged lawmakers to prevent what he warned would be a repeat of the state’s “pill mill” crisis about a decade ago, when rogue doctors dished out untold numbers of prescriptions for opioids to patients who lacked true medical reasons for the highly addictive pain medications.

“In the state of Florida, we have seen this play out before. We know how it ends, and we don’t need a sequel,” he said.

But Rep. Carlos Guillermo Smith, D-Orlando, said marijuana is safer than opioids, which have been responsible for thousands of deaths in Florida.

“The history of recorded medicine has registered exactly 0.00 fatal overdoses. What are we so afraid of?” Smith asked.

Democrats on the committee argued that research Roach relied on was faulty or outdated and that THC caps would end up making patients’ medical cannabis treatment more expensive.

“It’s not based on the science. It’s not driven by empirical evidence. It’s driven by an anti-cannabis agenda. We have reefer madness is the ideology that is prevailing in this legislation,” Smith said.

House leaders have pushed THC caps since lawmakers first authorized smokable medical marijuana in 2019, at the insistence of then-newly elected Gov. Ron DeSantis. The Senate has in past sessions blocked caps but Senate President Wilton Simpson, R-Trilby, said last month that the Senate was interested in considering the issue.

The Republican-controlled Legislature has maintained a dim view of cannabis since laying out a blueprint for the state’s medical marijuana industry following the passage of the 2016 constitutional amendment.

The latest effort to impose caps is drawing harsh criticism from doctors, patients and industry operators. Florida for Care, a non-profit organization associated with the effort to legalize medical marijuana in the state, delivered more than 30,000 petitions opposing caps to legislative leaders last week.

State representatives and senators are being flooded with phone calls and emails urging them to vote down the caps. Agriculture Commissioner Nikki Fried, Florida’s only statewide elected Democrat, also blasted the proposal.

“The people have spoken: Marijuana is medicine. Since taking office, we’ve legalized hemp for farmers and expanded access to medical marijuana, creating jobs and improving the health of Floridians,” Fried, a former medical marijuana lobbyist who is eying a run against DeSantis next year, said in a video released by her political committee Tuesday.

“Practicing physicians are the most qualified to determine what concentrations and dosages are required for each patient while having a comprehensive understanding of medicine and existing research and mitigating patient risks,” Noe said. “That’s different for each patient, depending on their medical conditions, medications or desired treatment outcomes.”

But Roach defended the proposed caps.

“I think these caps are very generous, and I think that the medical data shows us that the dangers of escalating beyond these caps,” he argued.

The committee rejected five amendments proposed by Democrats that included attempts to broaden qualifying conditions to be eligible for medical marijuana and lowering an annual $75 fee patients must pay to the Department of Health to access cannabis as a treatment.

“No part of this bill is actually expanding access. I do think it’s a very real concern that if we do put these caps into place, people are going to have to continue to purchase more medical cannabis,” Rep. Anna Eskamani, D-Orlando, said.

“You can say goodbye to flower. Say goodbye. Because that is the naturally growing, un-genetically modified result is you typically have above 10 percent on flower,” Smith said.

Although he voted in favor of the proposal during Tuesday’s committee meeting, Rep. Sam Killebrew, R-Winter Haven, expressed doubts about the measure.

“I don’t like this bill. I think we are again getting between the patient and the doctor,” Killebrew said, adding “Hopefully … we could get some changes before it ever hits the (House) floor.”