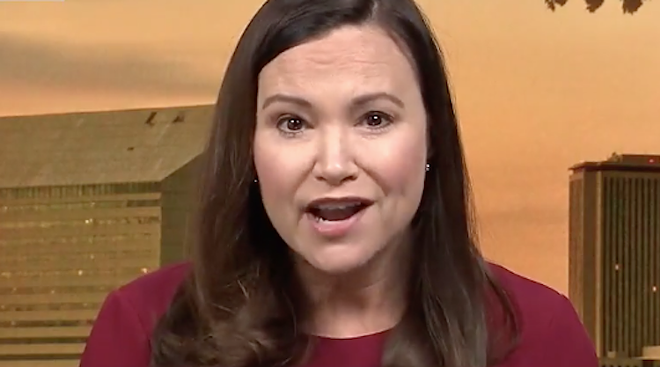 Florida Attorney General Ashley Moody explained her intention to sue the Biden administration over its immigration policies during a Tuesday appearance on the very serious political program Fox and Friends.

Citing a failure on the part of the Biden White House to deport enough immigrants to her satisfaction, Moody claimed that her "frustration has boiled over" and she has filed a lawsuit in federal court seeking an injunction to stop this apparent deportation stoppage.

During the segment, Moody painted an overheated doomsday scenario in which "criminal aliens" roam the state with impunity, law enforcement officers' hands are tied helplessly, and a "reckless" Biden White House is "thumbing its nose to its responsibilities."

Moody's federal complaint seeks to put a stop to new guidelines for ICE issued last month wherein "agents and officers have been told to prioritize threats to national security and public safety when deciding whom to arrest, detain and deport," according to NPR. The expected result of this policy shift would be a decrease in arrests and deportations.

Florida's complaint, as reported by the AP, outlines seven cases where ICE officials did not take immigrants into federal custody before they were released from state custody by the Florida Department of Corrections. With this injunction, Florida follows in the footsteps of a joint lawsuit filed by Arizona and Montana to undo Biden's immigration policies.

While the legal merits of Florida's quest for an injunction are a matter of question, the intent behind it is not. Post-election 2020, the DeSantis administration has enthusiastically embraced sundry Trumpist grievances as policy guidelines, whether it be proposed fines against "Big Tech" for censoring conservative voices, new elections legislation that leans in on voter suppression, and now this.

Or, as Florida Politics reported on Wednesday, it might not be a matter of coincidence that Moody's fundraising for re-election in 2022 has dramatically stepped up — not that she'd ever consider ginning up a lawsuit just to throw some red meat to the base and entice more campaign contributors.