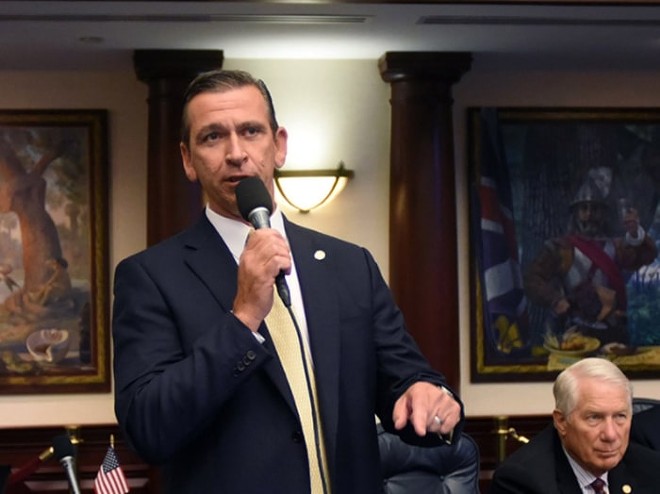 As Florida has spent the past year combating COVID-19, the state House is considering a proposal that would restrict local government orders involving public-health emergencies —- a measure that backs the power of Gov. Ron DeSantis.

In a 12-6 vote along party lines Tuesday, the House Pandemics & Public Emergencies Committee approved a bill (HB 945), sponsored by Rep. Bob Rommel, R-Naples, that would limit the duration of emergency orders issued by local governments.

While Republican committee members expressed a need to safeguard against restraints on civil liberties, Rommel maintained the bill is “not about masks.”

“It's about the overreach of local government, picking winners and losers, deciding that your civil liberties, your God-given rights don't matter. And they know best because it's three people, five people, seven people on some committee,” Rommel said.

Currently, local states of emergency can be ordered for seven days and extended indefinitely in seven-day increments as needed. Rommel’s proposal would allow a maximum of 42 days, approved in seven-day extensions.

The bill doesn’t directly address mask requirements, and Rommel discussed the disparity of COVID-19 orders on restaurants he operates in New Jersey and Naples when asked for specifics on the need for the change.

Rep. Carlos Guillermo Smith, D-Orlando, said with “anti-mask”people in the Capitol, he believes the preemption of local mask mandates is among the core aims of the proposal.

“We brag, some of us brag, that Florida's per-capita death rate is so much better than other states,” Smith said. “Imagine how much better we would have done with a statewide mandate. But here's what's key: Imagine how much worse it would have been without some local mask mandates and local leadership from our mayors and counties.”

Tonnette Graham, associate director of public policy with the Florida Association of Counties, called the proposal a “knee-jerk reaction” that could open local governments to lawsuits for failing to protect citizens.

“This is a fundamental shift in how we currently deal with and respond to emergencies on the local level,” Graham said. “This will ultimately lead us to not being able to protect what is paramount, that is the life and property of our citizens.”

Rommel initially proposed to limit the duration of the local orders to 30 days and for voters to approve any extensions, but he amended the measure on Tuesday.

DeSantis has opposed local government officials’ attempts to impose rules to curb the spread of COVID-19, saying that such measures “are not effective.”

On Monday, DeSantis contended some South Florida businesses could still be in lockdown from Miami-Dade and Broward county orders if he didn’t go “over the top rope” and “put people back to work.”

“I think that does need to be reformed,” DeSantis told reporters Monday when asked about local emergency orders.

I think there needs to be protection for folks, and you shouldn't have your entire livelihood just abandoned because of one emergency dictate by somebody, a mayor or whatever,” DeSantis added.

DeSantis in September suspended the collection of penalties and fines for violations of such things as local face mask ordinances as he moved the state into a final phase of reopening after shutdowns last spring because of the pandemic.

Democrats on Tuesday praised the work of local mayors and officials who initially imposed safety measures during the pandemic despite pushback from the governor.

Rep. Fentrice Driskell, D-Tampa, said county and city officials are closest to the people and should be able to decide for their communities.

“This bill is extraordinarily problematic to me,” Driskell said. “We all just want to move forward and keep our economy moving. And believe me, I want that more than anything. But I think we have to be very cautious about bills like this, that may seem popular at a particular time for a particular reason.”