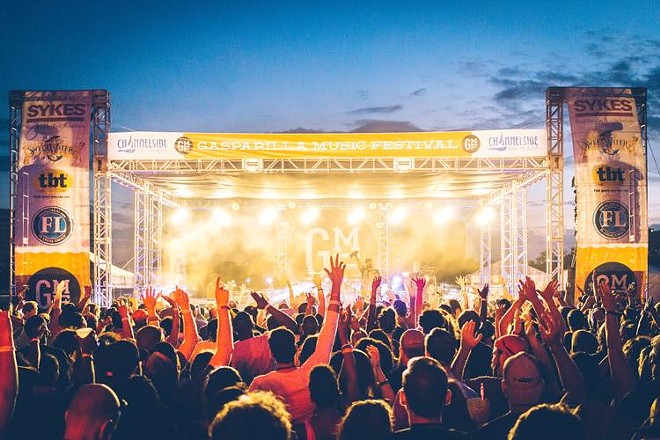 Downtown Tampa’s Gasparilla Music Festival is officially rescheduled for October in Curtis Hixon Park. Exact dates are to be announced, but it’ll include a third day, Friday, to go along with Saturday and Sunday concerts.

Executive director David Cox told Creative Loafing Tampa Bay that should the current trajectory continue, the GMF team — which intentionally worked to not get ahead of itself so that it didn’t have to backtrack on any new dates — sees October as a busy month not just locally, but with music festivals happening around the U.S.

Earlybird tickets for Gasparilla Music Festival 2021 go on sale in April or May, and Cox said the festival could have a lineup before summer’s end.

“The team here at GMF has been resolute that we will do everything in our power to bring back our festival as soon as it is possible to do so. If we can make it happen in 2021, then taking the whole year off was not an option,” Cox wrote in an email. “So many of our team members, vendors, artists, stage hands, and other supporting crew members have had their livelihoods eliminated over the past year.”

With seven months until the festival — and CDC guidelines expected to change — the exact best practices and COVID-19 protocol at GMF 2021 are still unknown, so Cox didn’t have anything specific to mention outside of the fact that every stage at the festival will also be livestreamed.

“We want to make sure that anyone with health concerns can still participate,” Cox added.

Because of my previous role assisting with social media at GMF from 2013-2016 I’ve known Cox for years and had many intimate conversations with him. I’ve never heard him offer up any kind of prayers for anything, but he was tossing them up in his comments about the reschedule.

“We pray that GMF 2021 will not only be a return to life where live music rattles downtown Tampa for a few days, but that it will also be a weekend where everyone from our ticket taker to the drummer on the amphitheater stage can celebrate a return of our local music and arts scene and their livelihoods,” Cox added. “October is happening! God willing, and the creek don't rise.”

The status of GMF 2021 immediately came into question when the Gasparilla day parade announced a postponement, which eventually became a cancelation. After the postponement, Cox told CL his festival's intention "as always would be to take place after the Gasparilla Invasion and related festivities."

With the announcement of 2021 dates, the team behind GMF, which built the festival with a grassroots, all-hands-on-deck effort, achieves a huge goal, which making it 10 years.

"Since we've started, dozens of festivals in Florida have come and gone, so to make it 10 years and continue to grow year by year is a huge source of pride for everyone at GMF," Cox said. "We've been talking about plans for the 10 year celebration since 2019. But now that we are here, our bigger motivation is just getting everyone in our industry back to work. If we can do that in some fashion, that will make our 10th year a huge success."