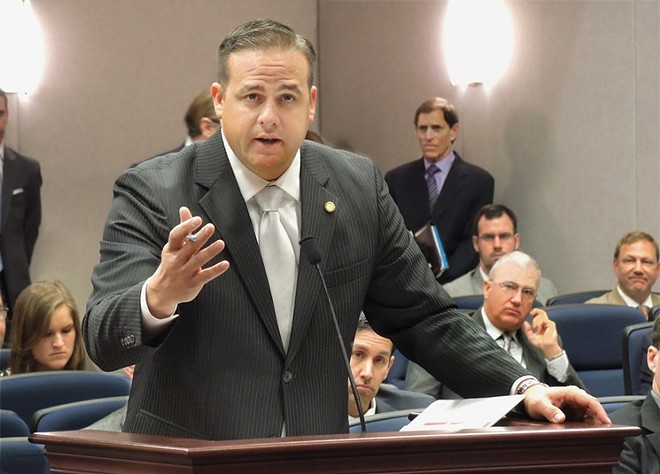 Florida Democrats are demanding that a state senator resign and a special election be held after a prosecutor charged a former Republican legislator with fraud related to a razor-thin Miami-Dade County race last year.

Garcia defeated Rodriguez by a 32-vote margin, while the similarly named Alex Rodriguez —- who was drafted by Artiles and ran as an independent —- captured more than 6,000 votes. The sham candidate did not live in the district or campaign for the seat.

Rundle, who said Thursday the investigation into election fraud is ongoing, emphasized that no evidence exists that Garcia was part of Artiles’ alleged plot to “confuse voters and siphon votes” from the incumbent Democrat.

But state Democratic Party leaders called for Garcia to step down after the ongoing legislative session, scheduled to end April 30, and for a special election so that voters can be assured of a legitimate winner.

Garcia’s “victory is clearly tainted and will forever cast a cloud on her service in the Senate, not to mention the entire Florida Senate,” Florida Democratic Party Chairman Manny Diaz told reporters during a video conference call Friday.

“This type of activity calls into question the very integrity and fairness of our electoral process,” he said.

The Republican-controlled Senate has a procedure that could result in the ouster of one of its members, but Senate President Wilton Simpson is standing by Garcia.

In a prepared statement provided to The News Service of Florida, Garcia and Simpson said Garcia was certified as the winner of the Senate District 37 race by the state Elections Canvassing Commission.

The Senate statement noted that Rundle said Garcia was not involved in the alleged crimes.

Artiles, a tough-talking U.S. Marine veteran whose brash demeanor earned him the moniker “Frank the Tank” during his tenure in the Legislature, stepped down from the Senate in 2017 after a racial and profanity-laced tirade at a private club.

According to an arrest affidavit that details what Alex Rodriguez told investigators, Artiles orchestrated the “ghost campaign” to oust the Democrat.

The affidavit said Artiles contacted Alex Rodriguez, who had moved from Miami-Dade County to Boca Raton, in May and offered to pay him $50,000 to run as a third-party candidate in the Miami-Dade race. Alex Rodriguez agreed, and Artiles told him to switch his voter registration from Republican to independent.

Artiles gave Alex Rodriguez the paperwork to file as a candidate, instructed him to use an old Palmetto Bay address that was still on his driver’s license and gave him $2,000 to open a campaign bank account. After the account was opened, Artiles allegedly rushed to Tallahassee to file the paperwork with the state Division of Elections.

On several occasions, Alex Rodriguez sought money from Artiles for “business” transactions, and Artiles gave him between $3,000 and $5,000, according to the allegations. Artiles took the money from a safe in his home office and asked for 30 percent of whatever profit Alex Rodriguez made from the deal.

One time, Alex Rodriguez asked Artiles to pay for his child’s Catholic school tuition. Artiles paid $6,798.39 to the school using his credit card. In all, Artiles gave Alex Rodriguez nearly $45,000, the affidavit said.

While calling for Garcia’s resignation and a new election, Democrats on Friday said investigators need to uncover who was behind the money Artiles gave to Alex Rodriguez.

“The public has a right to know if this is a one-off event,” Diaz said. “As a self -proclaimed Republican operative, is this the work of one rogue character acting alone, in the case of Mr. Artiles, or was he acting under the direction of his leaders? Where did he get the $40,000? By the way, how many of us have safes at home? Better yet, how many of us have stacks of cash laying around in our homes? This is a very serious issue.”

Senate Minority Leader Gary Farmer, who joined Diaz in the call, said the alleged wrongdoing in the Senate race is indicative of a pattern of misbehavior in Florida elections. He called for lawmakers to address “dark money” campaign financing during the legislative session.

“Our election code doesn’t provide the remedy of an automatic solution, and that’s pretty astounding when you think about it,” Farmer, D-Lighthouse Point, told reporters. “It really should be, you would think, a no-brainer that a new election would be held, but that is not the case right now, under our election laws.”

Farmer pointed out that Republican legislators are moving forward with an elections package that would make it harder for Floridians to vote by mail, although the state’s elections ran smoothly last year and no widespread fraud was found on the state or national level.

“So now we have evidence of actual fraud, real fraud, fraud that is proven in the form of the evidence in the facts contained in this arrest warrant,” he said. “What are our Republican colleagues going to do now, forced with proof of fraud that clearly impacted the outcome of an election decided by 32 votes. … We need our Republican colleagues to stand up and say, you know what, it doesn’t matter which jersey you’re wearing, elections need to be fair and they need to be free of fraud.”

Farmer noted that text messages included in the arrest affidavit show Artiles did not appear to be acting alone and reveal that at least one other unidentified person participated in the alleged fraud.

“This is not something new. This is something that’s been going on for a long time,” he said.