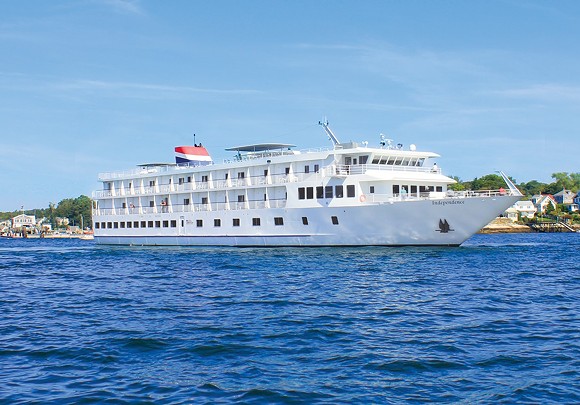 After months of delays and setbacks, cruising is slowly returning with many lines planning restarts within the coming weeks.

One of the first U.S.-based cruises since last spring launched earlier this month from north Florida on a short Historic South and Golden Isles itinerary. The cruise, which began in Florida’s Amelia Island and ended in Charleston, was on American Cruise Lines’ Independence ship, which holds just over 100 passengers. American Cruise Lines is following all CDC guidelines and will be enforcing a 75 percent capacity for its vessels, already some of the smallest on the eastern seaboard.

As its name implies, American Cruise Lines ships are built, crewed and flagged in the U.S., allowing the cruise line to sail between U.S. ports without international stopovers. This has provided an opportunity for American to resume sailing in the U.S. ahead of its larger competitors.

Viking, which will begin offering U.S. river and Great Lakes cruises next year, has not resumed cruises but does plan to launch U.K.-based cruises in May.

Meanwhile, major cruise lines are ramping up, including the first major cruise line sailings in the Caribbean since last year’s debacle on SeaDream 1. Celebrity Cruises’ Celebrity Millennium will homeport in St. Maarten beginning June 5. Seven-night itineraries onboard the ship will start on June 25.  Royal Caribbean, which already has sailings out of Singapore, will restart service in the Caribbean with Nassau-based itineraries launching on June 12. Crystal Cruises will also have Bahamas-based cruises beginning in July. Royal Caribbean also will be sailing out of Burmuda starting in June.

"We are thankful to the government and people of Bermuda for welcoming us to their beautiful island nation with open arms as Vision of the Seas' new homeport. This is another step in our safe and measured return to sailing beginning in June," said Michael Bayley, president and CEO of Royal Caribbean International.

The move by Royal Caribbean, Crystal and Celebrity to forgo U.S.-based ports, for the time being, isn’t surprising considering stringent guidelines laid out by the CDC before any approved relaunch. American-based cruise lines, like American Cruises and American Queen Steamboat, have smaller boutique-style ships that allow for much easier implementation of the protocols. The larger cruise lines rely on international labor and foreign registration of the vessels.

This has become a major issue over the past year, with politicians pointing to the lack of U.S. taxes and onboard employment as a reason to give cruise lines less support than other travel-related industries received. It also meant many cruise industry-reliant communities, such as those in Alaska, were left with a second season of few cruises due to Canada’s continued closure of its ports. Talk of a compromise to ensure Alaska’s season is salvaged is ongoing, but there’s little indication that Canada is interested in working with the cruise lines.

Royal Caribbean’s Odyssey of the Seas inaugural cruise will take place in May and sail from Israel, where vaccination rates are among the highest in the world. Royal Caribbean will require proof of vaccination for all passengers 18 years old and over, with those under 18 needing a negative result on a recent PCR test. For Israeli sailings, vaccines are required for all passengers over 16 years old.

Virgin Voyages, which was set to debut in April of last year, will see its inaugural cruise on the Scarlet Lady in July out of Miami. Like Royal Caribbean, Virgin, which doesn’t allow children under 18 years old onboard, will require all passengers and crew to provide proof they were vaccinated before departure.

Each cruise line has slightly different rules for those under 18, so it’s advised to check with the individual cruise line for specifics on the requirements.

The hospitality sector has leaned heavily on hopes that a quick and successful vaccine rollout will provide a much-needed boost to the industry. Reservations and polls indicate a strong second half of the year for the industry as people plan fall or holiday trips. Cruise lines are also reporting high demand for 2022 sailings.

While the pandemic is still far from over, with vaccines ramping up, cruise lines, like other travel industry segments, are now finally able to plan for a post-pandemic world.