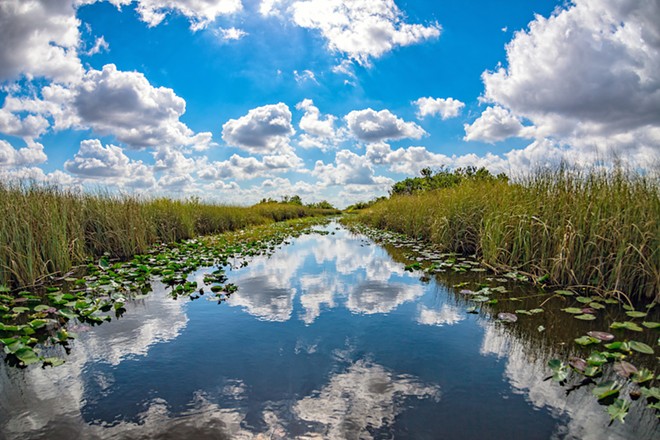 Gov. Ron DeSantis would get more than he requested for Everglades restoration and water projects in the coming year under an initial Senate budget proposal that also would set up a grant program to address sea-level rise.

In addition, the Senate is proposing an increase in money for the state’s springs, a reduction to the Florida Forever conservation program and an effort to help the citrus industry market orange juice.

The Senate Agriculture, Environment and General Government Appropriations Subcommittee on Wednesday rolled out a $6.1 billion spending plan that includes $786 million for Everglades restoration and water projects, which would be $161 million more than DeSantis requested.

The proposal would put up $29 million to start a local government grant program to combat the impacts of rising sea levels and flooding.

DeSantis has also suggested the state could use money it expects to get from the new American Rescue Plan Act federal stimulus package to help with sea-level resiliency efforts.

The Senate released a series of initial budget proposals Wednesday as a first step in a process that ultimately will lead to House and Senate leaders negotiating a spending plan for the fiscal year that starts July 1. House appropriations panels are expected to release initial budget plans Thursday.

The Senate proposal includes $17.7 million for citrus protection and research, with another $12.5 million to help the citrus industry take advantage of an increase in people buying orange juice during the COVID-19 pandemic.

“We got a bump on orange juice consumption because of COVID,” Albritton said. “But the way that the industry views that is that that won't stick around forever. So, what we have to do is, we have to invest resources, invest funds to make sure that orange juice and citrus products with their Vitamin C and their disease fighting capabilities, they are front of mind for the consumer.”

The Senate proposal also includes $75 million to restore the state’s natural springs, up $25 million from the current year; $70 million for water storage before it enters Lake Okeechobee from the north; $50 million for beach restoration efforts; $30 million for state park improvements; $21.7 million for the continued fight against harmful blue-green algae and red tide; and $348 million for loan programs involving drinking and wastewater.

Another $56.6 million would be used for land-acquisition programs, including $50 million for the Florida Forever program, which received $100 million in the current fiscal year.

Another $1.2 million would go into the Apalachicola Bay oyster restoration efforts.