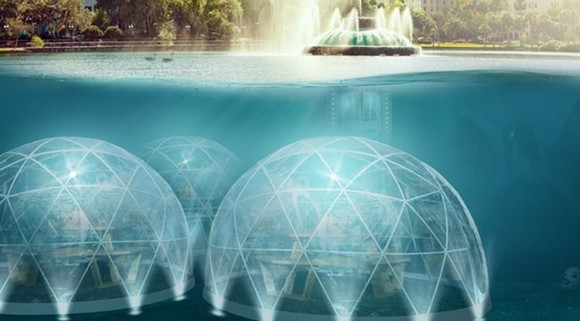 April Fool's Day is a bad holiday for bad people. Anyone who wants to celebrate liars should go to a family reunion and leave the rest of us in peace.

It's a noxious day for hucksters and con men and it's only gotten worse in the age of "just a prank, bro" and brands trying to be your friends. All this is to say, we're grading on a steep curve when we say that the city of Orlando's official April Fool's Day joke is pretty decent.

The city shared plans for a fake restaurant at the bottom of Lake Eola, called the Swan Dive. The fancypants restaurant lurking in the deeps of Orlando's downtown park looked more like a ritzy, privatized space mission than a murky outpost for literal bottomfeeding, in the city's rendering.


"This new underwater restaurant will have you feeling simply swan-derful as you take a deep dive under Lake Eola to see what our swans see," they wrote. "What do you think of these early renderings?"

Of course, no such restaurant is in the works. But it's a shame how close it is to the reality just off our shores. Rich people absolutely pay to dine in a literal bubble that reflects their metaphorical one. They just don't do it in Lake Eola (yet).