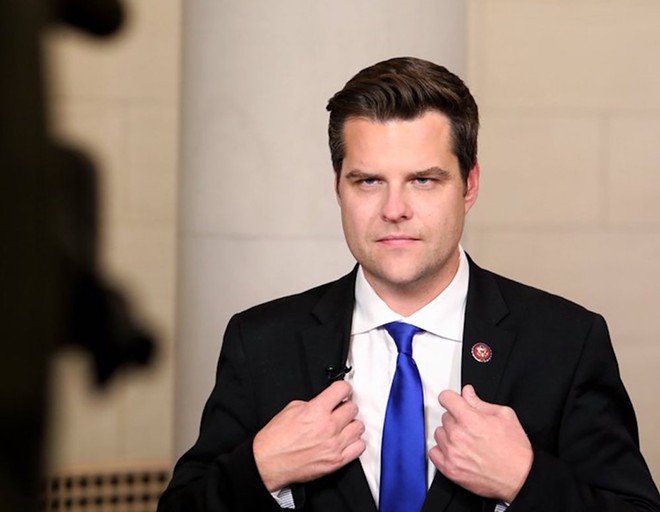 Just days after it was announced that Republican Congressman Matt Gaetz is under investigation for possible sex crimes, which stemmed from another investigation into his close associate, former Seminole County Tax Collector Joel Greenberg, State Rep. Anna Eskamni says the two sent an unsolicited, and “weird AF” voicemail to her cell phone.

In a Twitter thread posted Thursday morning, the HD47 Democrat said that Greenberg and Gaetz both called her phone and left a voicemail on July 4, 2019.

“He called me and I didn’t pick up (again, I barely talked to him),” said Eskamani. “He left a voicemail and it wasn’t just him, he was with Matt Gaetz too! I shared the voicemail with a few different people because again, it was SO WEIRD and I didn’t realize they were friends.”

In the voicemail, Eskamani says the two wished her a happy 4th of July and called her “the future of the Democratic Party.”

“It was Joel wishing me a happy fourth and then he said there was someone who wanted to say hi and then it was Matt who said hi and referred to me as the future of the Democratic Party,” said the District 47 rep.

Eskamani, who in 2018 called for Greenberg to resign after he shared anti-Islamic posts to Facebook, says the voicemail preceded another uncomfortable situation, where he asked her to lunch and was presumably “high the entire time.”

“He pushed me to have lunch with him after he kinda/sorta apologized,” said Eskamani in another tweet. “I picked a very public place to meet in HD47 — it was the weirdest meeting I’ve ever had and I’m pretty sure he was high the entire time too.”

“He also tried donating $100 to both my 2018 and 2020 campaign — unsolicited by me. I re-donated his first $100 to a Muslim-led organization and I refunded the second. We weren’t even in any communication yet he would donate to me. It was so weird!” she continued.

In the thread, Eskamani points out that this type of behavior is unfortunately commonplace toward women, and urged others to share their stories as well.

“I haven’t shared any of this publicly because for so many women, feeling forced to have lunch with someone you don’t want to have lunch with or getting unsolicited gifts and phone calls is the norm. You internalize it and just try to avoid that person. I’m not doing that anymore,” said Eskamani in another tweet.

On Tuesday evening, the New York Times broke the story that Gaetz is being investigated for having a sexual relationship with a 17-year-old girl and violating laws against sex trafficking in the process. The story has since been confirmed by multiple outlets, and Gaetz himself.

Meanwhile, his buddy Joel Greenberg, who is already facing 14 felony counts accusing him of things like stalking a political opponent, using a state database to create fake IDs, and sex trafficking a minor between the ages of 14 and 17, was hit Wednesday with a slew of new charges, including wire fraud, conspiracy to bribe a public official, theft of government property, and accusations that he used department funds to buy Bitcoin and Michael Jordan merchandise for himself.

This post originally appeared in our sister publication Creative Loafing Tampa Bay.
–
Stay on top of Central Florida news and views with our weekly newsletters, and consider supporting this free publication. Our small but mighty team is working tirelessly to bring you Central Florida news, and every little bit helps.