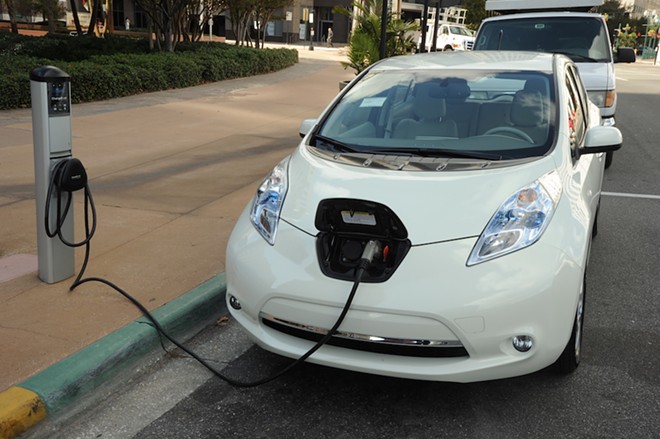 Mayor Buddy Dyer and the Orlando Utilities Commission unveiled a network of 100 electric vehicle charging stations throughout Orlando on Thursday.

According to a press release, the stations will be scattered throughout 33 locations in Orlando, including the MCO airport, downtown Orlando, and College Park. Locations can be found in various parks, parking garages, public venues, neighborhoods and senior centers. Each location will have at least one ADA-accessible EV charging station.

The EV charging stations would be a step toward OUC's goal of reaching net-zero carbon emissions by 2050. The utility has set  midway goals of reducing emissions by 50% by 2030 and 75% by 2040.

Although the push toward net-zero isn't what Dyer initially promised the city in 2017, Dyer went on Twitter to celebrate the addition of the EV stations.

Commissioners Hill, Stuart and I joined @OUCreliableone today to unveil one of the 100 new EV charging stations installed citywide. We want all residents to be able to take part in our community’s sustainability efforts, so we’ve placed these at parks and neighborhood centers. pic.twitter.com/PXNQcOl7JM

A representative from the mayor's office said the new charging stations would be critical to support the growth of clean, zero-emission transportation for city operations, residents, and visitors.

"This expansion of EV charging infrastructure is part of Orlando's continued efforts to transform the city into one of the most environmentally-friendly, socially inclusive and economically vibrant cities in America," the representative said.