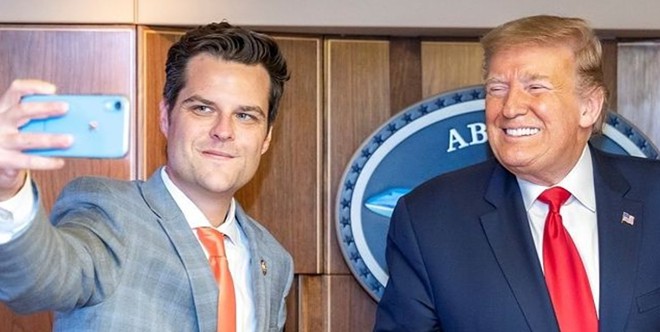 But that's exactly what Florida representative Matt Gaetz did last night. The troubled Congressman put the spotlight on a tweet from Emily Brooks, a reporter for the conservative publication The Washington Examiner. In the tweet, Brooks shared a photo of a document she received from Gaetz, detailing"Project Homecoming." That's the name of an alleged extortionate proposal pitched to Gaetz's father, Don. A screenshot of a text to the elder Gaetz also shared by the congressman is being pointed to as further evidence of the scheme.


The tweet came after the New York Times shared a report claiming Gaetz sought blanket, preemptive pardons for potential crimes from the Trump administration before Donald Trump left office. The Times' unnamed sources said the request didn't get far, with Trump lawyers and aides viewing a pardon before-the-fact as a bad precedent.

The initial allegation against Gaetz, that he may have enticed a 17-year-old across state lines for the purposes of sex, gets more plausible by the day.
Politico shared that three anonymous sources, including one who testified to a grand jury, say that Gaetz associate Joel Greenberg bragged about having sex with a then 17-year-old who became an adult actress. The Times has reported that the same minor is at the root of investigations into both men.