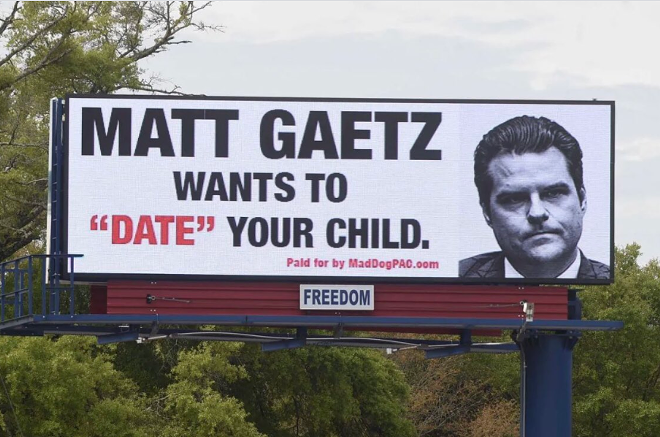 The sign sits on FL-85 in near the Panhandle town of Crestview. It's the work of the liberal Mad Dog PAC, who have previously put up anti-Gaetz billboards mocking Gaetz's 2008 DUI arrest.

A quick look around the committee's website shows it was all in on anti-Donald Trump messaging and allegations of Russian collusion. While they have updated the home page to talk about the 2022 midterms, most of the site is still dedicated to Trump.

The new billboard is poking Gaetz over the ongoing investigation into whether or not he had an inappropriate relationship with a minor. Reports around the investigation into Gaetz have revealed that the congressman may have been involved with disgraced Seminole County Tax Collector Joel Greenberg. The New York Times reported that federal investigators were looking into whether Gaetz and Greenberg set up sugar daddy arrangements, particularly involving one then-17-year-old.