Universal Orlando is about to open a cool new roller coaster. A glimpse at their other parks hints at what might come next

Universal has been on a multi-year expansion of its parks, resulting in new attractions nearly every year. Despite the pandemic, leadership remains committed to new investments in the parks and are still moving forward with Epic Universe, the largest expansion since Islands of Adventure opened in 1999. Even as Epic Universe construction ramps up, new additions are still moving forward at Universal’s other parks.

Universal executives have been focused on opening the new Beijing resort, now slated to debut later this year. There’s also been plenty of focus on Hollywood, where multiple new attractions have been in the works.

While Universal Studios Florida did see a new stunt show replace the former Terminator attraction, the park is going on three years without a new ride. The drought at Universal Studios is thanks to two new high-profile roller-coaster attractions that have opened next door at Islands of Adventure, including the VelociCoaster coming in June.

There are numerous rumors of what Universal has planned next for the resort, but all seem to coalesce around the fact that the two existing parks lack family-friendly offerings and have certain sections that are now outdated.

In recent years Universal has worked on updating the most dated areas of the resort. That has included replacing Amityville with Diagon Alley, changing out Back to the Future with Springfield, and adding multiple new concepts to CityWalk. The resort has seen numerous major updates during this period, but some areas remain in need of help. There are four sections of the two existing parks that will each likely receive major updates in the coming years. Out of those four, none are as dated and in need of help as Kids Zone.

Kids Zone at Universal Studios Florida has long been rumored as the next major area to leave. The land is a conglomeration of dated kid-focused franchises, from Fievel, who hadn’t seen a theatrical release since 1991, to Woody Woodpecker. Construction walls were placed around the land in 2017 as the resort readied to break ground on Super Nintendo World in the area. But with Epic Universe greenlit soon after the construction walls were removed, the land remains untouched.

After a twenty-six-year run, the A Day in the Park with Barney show and play area closed earlier this year. That has once again revived many rumors regarding the future of this seemingly forgotten section of Universal Studios Florida.

It’s expected that the hodgepodge approach to the land will be replaced with a single unifying property, as is common today. Two of the strongest rumored concepts for this area are Trolls or something related to Nintendo. Trolls already has a presence in the parks with a popular meet-and-greet that includes a nude glitter-farting troll. 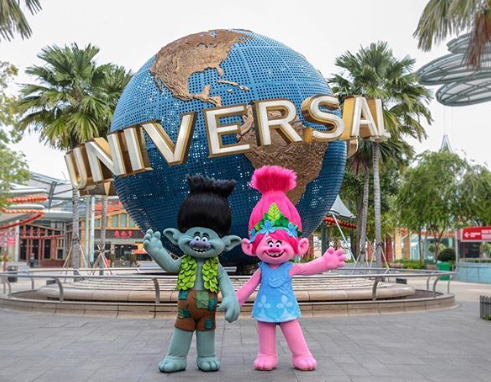 Meanwhile, in Hollywood, Universal recently opened the Secret Life of Pets dark ride with many fans immediately calling it a classic. The success of the omnimover style dark ride is in stark contrast to the less-than-stellar reviews surrounding Universal’s last major indoor ride, Fast & Furious – Supercharged. Poor reviews of that attraction buoyed criticisms of Universal reliance on screen-based attractions.

After Fast & Furious, Universal shifted gears. None of its newer rides, other than the augmented reality-based Mario Kart, are reliant upon screens. Secret Life of Pets does feature some screens, but they’re balanced with dozens of animatronics and practical sets. The Pets attraction, and a mostly outdoor Yoshi ride that's in Super Nintendo World, fills a void for Universal parks, which previously only had a handful of kid-friendly dark rides across the company’s four current resorts.

Even before Hollywood opened Secret Life of Pets, the attraction was rumored for Orlando. It was rumored to be replacing either the Monsters Café or Shrek. Production Central, where Shrek and the café are both located, is a holdover from the days when the park was themed to a working movie studio.

There have been attempts to address the nondescript warehouse-like buildings that greet visitors in this area, but the two large show buildings that form most of the land remain nearly identical to how they looked when the park opened in 1990.

In Hollywood, Minions and Secret Life of Pets are part of an Illumination Studios mini-land. This has led to speculation of a similar mini-land coming to Orlando. Universal was previously rumored to be looking at adding a second Minions-themed trackless dark ride in Orlando, slated to replace the Shrek 4D attraction.

Production Central and Kids Zone aren’t the only challenging areas facing Universal. At Islands of Adventure, the newspaper cartoon strip-themed Toon Lagoon was dated even before it opened. Within the land, a large amphitheater has sat unused for years. The main corridor of the land includes numerous intellectual properties that are now little known, and the colorful aesthetic of the land requires nearly constant upkeep. Rumors for this land have included almost every major film franchise. Still, with Universal now controlling Illumination and DreamWorks, the land may finally receive cartoons relevant to this century.

The relevancy issue has recently cropped up across the lake at Seuss Landing. Last month, Dr. Seuss Enterprises announced it would discontinue six books that have racist and insensitive imagery. One book included in the ban, If I Ran the Zoo, has an attraction based on it at Seuss Landing, though none of the problematic imagery was recreated in the walk-thru attraction. Due to the hands-on nature of the attraction, it has remained closed since the parks reopened. Another book from the list, And to Think That I Saw It on Mulberry Street, is also referenced in the land.

After Dr. Seuss Enterprises announced their decision, Universal Orlando issued a statement explaining "Seuss Landing continues to be very popular with our guests and we value our relationship with Seuss Enterprises. We’ve removed the books from our shelves as they have asked and we’ll be evaluating our in-park experience too. But our guests can plan on continuing to be able to enjoy their favorite experiences at Seuss Landing.”

If Seuss Landing is removed it wouldn't come as much of a surprise as in recent years Universal has moved to rely more on intellectual properties they own outright, apart from Harry Potter.

A move to update Seuss Landing may also include the remains of Lost Continent, which was cut in half with the opening of the original Wizarding World land. Lost Continent is also home to a currently unused amphitheater and an indoor attraction. The land’s mystical theming has led many to speculate this is where the rumored Zelda land will be headed, though, again, there’s no indication from Universal at this time any such land is the works.

The past six years have seen multiple plans for these sections bubble up only to be canceled, but as each of these areas continues to age, it's inevitable that they will eventually be remodeled. The company’s recent theme park additions show they’re now focused on rounding out their offerings, embracing family-friendly storytelling, and aren’t afraid to finally let go of the screens that defined them for so long.