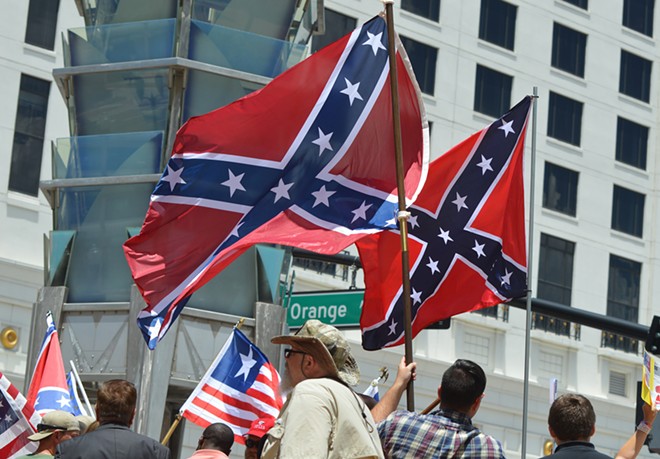 Nothing major is planned and no one gets a paid day off, but it’s an official state holiday nonetheless, and Florida is one of only five states that still do this every single year.

Not only that, but the state also celebrates other pro-slavery dates like Robert E. Lee’s birthday on Jan. 19 and Jefferson Davis’ birthday on June 3.

This year, Florida Democrats like State Sen. Lauren Book of Plantation and Mike Grieco of Miami Beach filed legislation to scrap the official recognition of Confederate holidays, but these proposals failed to even reach a hearing in the GOP-led legislature.

Republicans, however, did have time to pass a resolution forcing schools to recognize the slippery slope of democratic socialism, and even to approve another proposal inching us a little closer to state-sanctioned prayer in the classroom.

In fact, the Florida Legislature was so crunched for time they also didn’t have room on the schedule to condemn the mob of Trump supporters who refused to admit they lost the election and decided to storm the U.S. Capitol and kill two cops in the process.

But selective amnesia about American history is really what “Confederate Memorial Day” is all about. As the Southern Poverty Law Center points out, the day is best described as a nod to the Jim Crow South, a time period when most of these statues were first erected.

“Since Reconstruction, Confederate symbols have been used by white supremacists as tools of racial terror,” said Southern Poverty Law Center chief of staff Lecia Brooks in a statement. “The United Daughters of the Confederacy and the Sons of Confederate Veterans erected hundreds of memorials to the Confederacy across the United States as part of an organized propaganda campaign, created to instill fear and ensure the ongoing oppression of formerly enslaved people.”

Many conservatives argue the holiday is about “preserving history” and respecting the deaths of Confederate soldiers. While both of those things can be true, so can the fact that the meaning and context of symbols changes over time, like when the Confederate flag was paraded through the U.S. Capitol at the insurrection, or when it was embraced by Dylann Roof, a white supremacist who killed nine African Americans at a Charleston church in 2015.

Fittingly, Confederate Memorial Day falls about a week after Florida Gov. Ron DeSantis signed his “anti-riot” law, which, along with a slew of other things, makes it a felony to even be present at a rally that turns violent, and protects Confederate monuments and other racist memorials, statues and historic property.

Of course, that bill has been widely panned by Democrats, activists and civil rights leaders, and is currently being tested in court.

Since it seems Confederate Memorial Day isn’t going anywhere anytime soon, perhaps celebrate today by losing at something, building yourself a participation trophy and then forcing everyone to stare at it in a public square for one hundred years. Or, you could take the time to let your state reps know how dumb it is we still recognize and protect racist statues meant to intimidate.