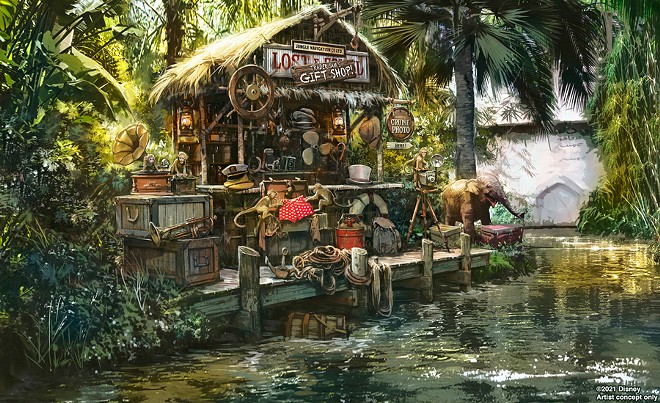 Disney has shared yet another look into their revamped Jungle Cruise.

In a post to the Walt Disney World park blog, Disneyland PR head Michael Ramirez shared renderings of another new gag that will line the updated cruise. The scene centers around an arrangement between long-time ride character Trader Sam and the newly introduced proprietor of the cruise line, Alberta Falls. While Alberta asked Sam to set up a lost & found for ride-goers who accidentally dropped their belongings in the drink, Sam saw dollar signs.

"Word on the stream is that Alberta Falls, proprietor of the Jungle Navigation Company Ltd., has entrusted her longtime friend, Trader Sam, to manage the new Lost & Found location," Ramirez wrote. "But, with Trader Sam being Trader Sam, there’s always an opportunity to make some extra money. After all, all the best rides end with a gift shop, right?"

The result is a lost & found papered over with "for sale" signs, hoping to hawk the goods of unfortunate tourists to newer visitors who didn't lose their wallets. It's all part of a massive revamp that Disney is undertaking at both of its U.S. parks, updating the more than 50-year-old ride to remove its more racist elements. The ride closing gave Imagineers the opportunity to update one of the oldest rides in both parks, and they're clearly excited to run with it.