If you’ve ever watched a person swing through the air on one of Central Florida’s skycoasters and thought, ‘that would be more fun if I was able to do it with a busload of people,’ then there’s a brand-new ride concept you will love.

Windermere resident Bill Kitchen made a name for himself in the 1990s when his Skycoaster concept quickly became a mainstay at boardwalks and entertainment centers worldwide. It can now be found on every continent except Antarctica.

The bungee-style ride allows for up to three riders to be pulled backward towards a large tower then drop. In Central Florida, where multiple versions of the ride are located including the world's tallest version at Fun Spot in Kissimmee, it has become a rite of passage for many tourists. But the low hourly capacity has kept the ride out of most theme parks. Now Kitchen has a new concept that keeps many of the thrills in place from his former attraction  while improving throughput by having up to twenty-four passengers at a time.

The new concept, known as the Skyscreamer, replaces the bag-like fly suits that passengers on the SkyCoaster had to wear with a vehicle more akin to what one would see on a carnival ride. The circular  vehicle can be adjusted to hold as many as 24 passengers. After passengers are loaded onto the ride platform, it slowly lifts off the ground, then is pulled back towards the lift tower. The towers can be as tall as a thirty-five-story building, with the ride vehicle swinging even higher. Due to the circular design of the ride vehicle, passengers will spin as they swing back and forth. A patented pendulum damper allows for the ride vehicle to come to a stop on its own, another improvement over the hook style system used on the Skycoaster.

Kitchen has been called the “Willy Wonka of Thrill Rides” due to his unique, one-of-a-kind creations. With a background in electrical engineering, the self-proclaimed thrill-seeker has developed some of the world’s wildest attractions. After success with the skycoaster, Kitchen designed a successful indoor skydiving tunnel concept. That project resulted in the Skyventure attraction on International Drive, was eventually sold, and became iFly, the world’s largest indoor skydiving entertainment company. 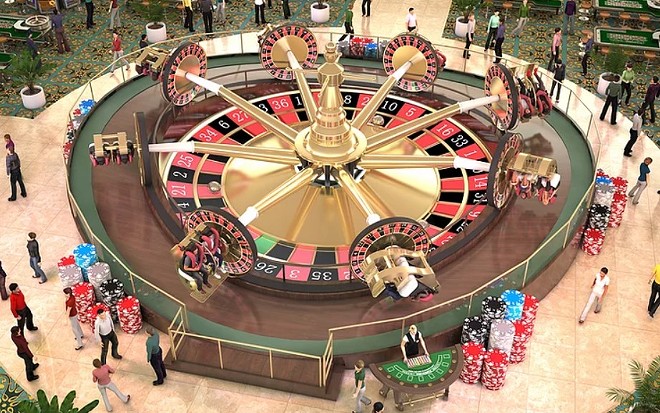 The Unicoaster, a spinning flat ride that constantly flips riders upside down, has seen success at the Nickelodeon-branded indoor theme parks in Minnesota and New Jersey. There’s also the Polercoaster, an observation tower encircled by a roller coaster. One such tower, the Skyscraper at Skyplex, was previously proposed for the corner of International Drive and Sand Lake Road. That project has seen multiple delays but remains active.

Like the Polercoaster, many of Kitchen’s boldest ideas have yet to be realized. His coaster-style spokeless observation wheel concept had been planned for what is now known as ICON Park, but the developer ultimately opted for a more proven and cheaper traditional observation wheel. Another observation tower concept, the Skyspire, has also seen little success in being realized.
The lack of success in getting his projects built hasn’t stopped Kitchen, who is known for his excited stories and unique approach to designing attractions. Kitchen has faced many setbacks, including a high-profile home invasion and kidnapping by ninjas, but each time he has come back with ever-more-daring thrill rides.