Earlier this month, social media and Disney fan sites were filled with reports that Disney Springs’ latest restaurant venture, Beatrix, had been canceled.

The health-focused, fast-casual concept from Chicago was slated to replace the former Bongos Cuban Café that closed in 2019. At the same time as the news of the pause was percolating through local sites, new notice of commencement permits for the site were submitted to Orange County.

The permits look to have confirmed the project, described in the permits as a “Full-service restaurant consisting of approx. 18,500sf indoor & outdoor seating,” would be moving forward. But a spokesperson for the restaurant’s parent company, Lettuce Entertain You, confirmed to the Orlando Weekly that this is not the case.

“The Beatrix project in Disney Springs has not been canceled. As a result of the pandemic, Disney and Beatrix have agreed to delay the start of construction. During the postponement, rather than leave the site a construction zone, it was also agreed that the property would be returned to green space until the project is restarted. At this time, a definite date to restart had not been determined,” explained Cara Yaffe, Divisional Director of Marketing & Communications at Lettuce Entertain You Restaurants, to the Orlando Weekly. “At this point we are only returning the construction site to green space. The Beatrix project has been deferred and we do not have a date when construction of the building will recommence at this time.”

In Chicago, some Beatrix locations offer large self-serve stations. In 2019, Lettuce Entertain You confirmed to Orlando Weekly that the Disney Springs location would be a more full-service restaurant. It’s unclear if any of the self-serve stations that are now viewed as problematic post-pandemic were included in the original plans. But, similar langue remains on the Disney Springs location’s website.

On the website, which confirms the delay in construction, Lettuce Entertain You explains, “Beatrix at Disney Springs West Side will feature a full-service restaurant, coffee bar and lounge, grab-and-go market, fresh-squeezed juices and an in-house bakery. The menu highlights healthful comfort food including vegetarian, gluten free and vegan options, fresh-squeezed juice cocktails and an American beer and wine selection.”

Construction pauses, especially for restaurants, aren't surprising. Shipping and production issues related to the pandemic have caused construction materials to skyrocket in price. Lettuce Entertain You leaders are also likely quite busy dealing with ongoing pandemic-related matters at their existing restaurants, many of which are found in downtown areas and previously relied on dine-in service.

Even prior to the pandemic, it wasn’t uncommon for a project to push ahead with its permits while expecting a delay in construction. According to public documents, Beatrix has up to two years to begin construction. It’s also not unusual for timelines like this to be easily extended due to natural or economic events.
The pause comes as other segments within the West Side neighborhood at Disney Springs struggle. Cirque du Soleil’s Disney-filled Drawn to Life production was set to debut last year but was delayed. It will be only the second show at the custom-built Cirque theater since it opened more than twenty years ago. Next door, the former DisneyQuest was fully demolished to make way for the NBA Experience. Even before the pandemic, the upcharge attraction was widely viewed as a flop.

On the other side of Cirque’s theater is an open field. There were rumors of a family entertainment center-style complex planned for the site. No official announcements regarding that project or any others have meant that site remains undeveloped.

While other sections of the former Downtown Disney saw major overhauls, the West Side remained mostly intact with little to differentiate it from its former self. At Downtown Disney, the West Side was the newest of the three neighborhoods. The former Marketplace area saw many of its buildings remain untouched, but new pedestrian bridges and updated retail offerings helped ensure it remains popular. Many of the most dated Memphis-style flares were muted in the West Side, but the industrial 90s big-box aesthetic still dominates the area.

The single most significant update planned for West Side was a ‘High Line’ style dining area that was to feature seating areas for the nearby food trucks and a bar. Sections of the elevated walkway were built, but the project was eventually canceled. Now the various sections act as a shade structure but are a pale comparison to what had been hyped in early concept art. 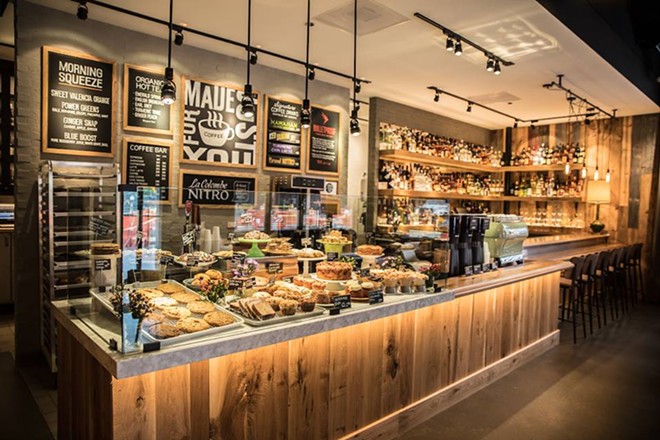 Beatrix was to fill a void in West Side’s offerings. Its healthy fast-casual concept would act as a bookend to venues in the Marketplace, where popular lunch options like Earl of Sandwich can be found. The choice to replace the Miami vaporwave stylings of Bongos with a design more suited to the newer Disney Springs backstory.

While not giving a timeline on when construction may begin or future plans Lettuce Entertain You may have for the Florida market, Yaffe was clear that Beatrix at Disney Springs had not been canceled. Instead, the concept has just been temporarily delayed.