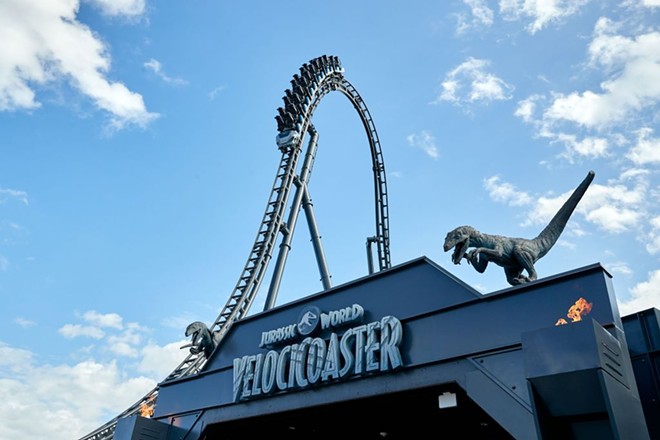 More details on Universal Studios' newest coaster have been shared by the theme park.

Fans have been incredibly curious about the Jurassic World: VelociCoaster, which the park calls"the apex predator of coasters." According to a press release, the original cast from the movie, including Chris Pratt, Bryce Dallas Howard, and BD Wong, are set to repeat their roles as Owen, Claire, and Dr. Wu on the ride.

Guests can expect plenty of twists, turns, and drops, while being chased by a raptor pack at 70 mph, barreling 155-feet into the air and dropping at an 80-degree angle.

The hunt begins immediately as guests escape the clutches of raptors from the film franchise, including Blue, Charlie, Delta and Echo and launch into the chase throughout the raptor holding area.

The smell of wet dirt while waiting in line will signal to guests that their time to embark on the hot pursuit is approaching. They'll get a peak of what to expect while passing through a collection of adjacent windows in line, and eventually will be met by velociraptors so close, they can even feel their breath.

The ride opens on June 10 at Universal's Islands of Adventure.