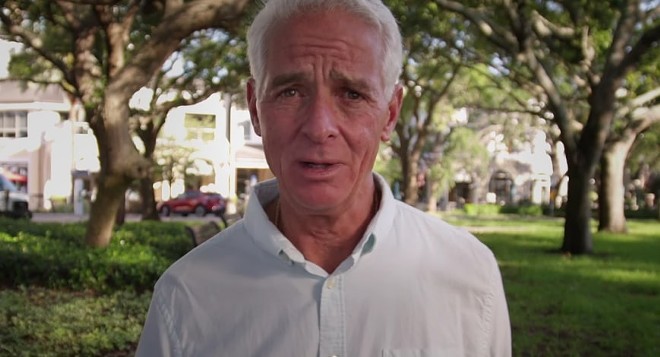 Rides aside, the Jurassic Park areas of Islands of Adventure do a pretty good job of showing what life was like millions of years ago. If you look beyond the bones and raptor packs, you'll see a fresh-faced Buddy Dyer taking office for his first term as Orlando's mayor. Just outside the raptor paddock, some politician has the bright idea to build high-speed rail between Orlando and Tampa. And somewhere in the dark, under the watchful eye of a mama Tyrannosaurus Rex, Charlie Crist is plotting a run for governor of Florida.

Like the ladies doing it for themselves in the first Jurassic Park movie, Crist has shown a surprising amount of adaptability and a glut of survival skills. After he became the GOP's persona non grata for the crime of hugging the first Black president of the United States, Crist dropped the long-held R behind his name. He ran as an independent for a Senate seat, losing to Marco Rubio. Eventually, Crist found success as a Democrat, winning two elections to the US House of Representatives in Florida's 13th congressional district.

He's made one run at the state's top office since leaving Tallahassee in 2011, a failed bid to unseat Governor Rick Scott in 2014. That election was a nail-biter, with Scott winning by 1% of the vote. Still, the loss seemed to temper Crist's statewide office aspirations for a time. That time has come to and end. Crist just announced his intention to run for governor of Florida in 2022.


Crist's announcement came in the form of a post to Facebook. In the clip, Floridians harken back to the supposed good old days of Crist's tenure, when Florida was in the throes of a violent economic crash caused by rampant real-estate scamming.  (To Crist's credit, he has come around to the idea that LGBT people are deserving of rights, a far cry from the GOP's current party line.)

His campaign ad/announcement promises things well to the left of his platform when he held the governorship. The ad calls for a Florida offering fair wages, affordable housing, well-funded schools and protected voting rights. Whether he'll be successful or the idea of the good life in the Sunshine State will go the way of the dinos remains to be seen.