Universal's new Jurassic World: VelociCoaster is a terrifying run with the raptors 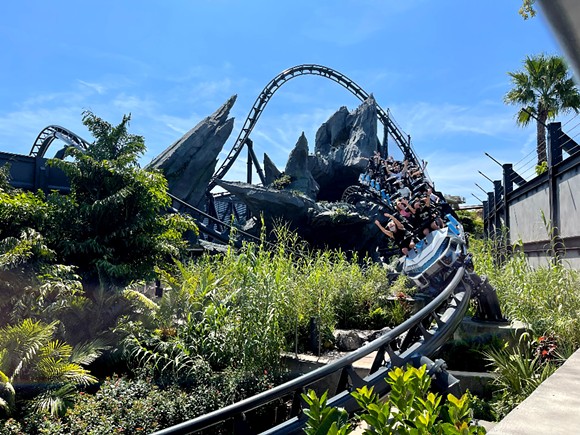 The pandemic put most major projects in the theme park industry on pause, and prompted some resorts to let nearly completed attractions remain unopened while waiting for the economy to recover. But while Disney waits until October to debut Epcot’s Ratatouille ride, Universal Orlando is again breaking from the pack and unleashing another marquee attraction.

Less than a year after premiering the powerhouse Bourne Stuntacular show at Universal Studios Florida, Universal has begun “technical rehearsal” previews for the Jurassic World: VelociCoaster, building anticipation for the ride’s June 10 grand opening. I was recently among the lucky guests allowed to serve as test dummies for this saurian scream machine, and got to discover for myself if coaster manufacturer Intamin’s intimidating pretzel of twisted track truly delivers the world-beating G-forces that thrill junkies have been dreaming about. Spoiler alert: to quote myself cresting the signature 155-foot-tall “top hat” hill, "HOLY CRAP, YES!”

A few years back, the Jurassic World-inspired Raptor Encounter puppet photo op wedged a razor-sharp talon into the door of Jurassic Park’s “Isla Aventura” backstory, which the VelociCoaster has now kicked wide open by weaving that franchise’s modern blue aesthetic around the vintage Discovery Center. The two brands blend surprisingly well aesthetically, although there’s no apparent explanation of the overlapping timelines for nitpickers; they even managed to preserve and relocate the giant ficus that once was a fixture of the land’s skyline. In the rarely occupied rest area where that tree once stood, you’ll now find the industrial entrance of the Jurassic World, with trains barreling along the adjacent shoreline at 70 miles per hour making it crystal clear exactly what kind of adventure is in store.

As with every major modern attraction, VelociCoaster’s story starts in the queue, and you’ll be hard pressed to find a more entertaining one anywhere – except, of course, in the Wizarding World next door.

Stops along your walking tour of the raptor training facilities include an observation window where digital dinosaurs can be seen chasing the actual coaster cars; and a grooming stable with animatronic raptors that blink, breathe, and even smell exactly like I’d imagine real ones would.

A roller coaster this fast doesn’t really need an in-depth narrative, but VelociCoaster’s story cleverly inverts the overused theme park trope “you’re on a pleasant tour when something goes horribly wrong,” which visitors may recognize from Jurassic Park River Adventure, Reign of Kong, Star Tours, Expedition Everest, and countless others. Instead, here guests are explicitly warned by Grady that they’ll probably get eaten alive during their absurdly dangerous visit inside the raptor paddock, but Blue and her buddies really just want friends to play with.

Those raptors are only seen during the ride itself as static statues and projection screens (nobody needs another "Disco Yeti"), and although I’m slightly disappointed that early rumors of a final physical effect didn’t come to fruition, there is an audio clip before unloading that really ties the land together.

VelociCoaster’s environment is interesting enough for coaster-phobics to traverse, and there’s a family room screening Nexflix’s Camp Cretaceous cartoon to wait in while your braver companions are riding. But if you are willing to strap in, you’ll find your feet dangling slightly above the floors of the claw-scarred trains, which carry 24 passengers in 12 2-seat rows, with only a hip-to-thigh lap bar securely pinning you in your seat. Since there are no over-the-shoulder restraints to bang your ears on, your upper body is free to flail about like a Barbie doll in the hands of an angry toddler. Universal claims the VelociCoaster delivers 12 total seconds of weightlessness, but this isn’t gentle “floater airtime”; we’re talking full-throttle negative G-forces that will happily eject anything on your face or head into the murky lagoon. (Lucky for my cellphone, there are free lockers just before the boarding station, an innovation that should be mandatory on all future thrill rides.)

Other roller coasters across Central Florida – or indeed around the world – may be taller, faster or longer than VelociCoaster, but I can’t think of another ride I’ve experienced that packed in so many exhilarating elements back-to-back-to-back. Unlike the Incredible Hulk, which now relinquishes its crown as Universal’s most intense coaster, VelociCoaster starts strong and then builds, delivering increasing intensity from the first 50 m.p.h. linear induction launch right through the "mosasaurus" barrel roll over water that serves as a heart-stopping finale.

The first half of the ride is full of surprising turns and head-chopping rockwork, the second half will peel your face off while making you forget which way is up, and – if you are anything like me – every second will have you scream-laughing through your tears.

If you want to run with the raptor pack yourself, watch for soft opening opportunities during the coming weeks, and brace yourself for massive crowds on opening day. I only hope Universal has learned its lessons from Hagrid’s technically troublesome debut, and works out any amber-encrusted bugs before fans bang down the gates.