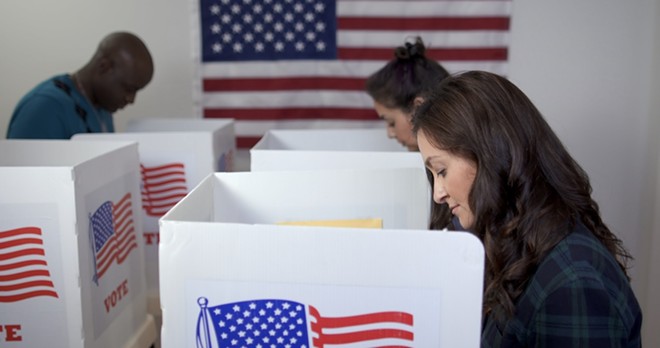 Just a day after Gov. Ron DeSantis signed the bill, the American Civil Liberties Union of Florida filed a constitutional challenge Saturday to a measure that would limit contributions to political committees backing ballot initiatives.

The ACLU argued in a lawsuit filed in federal court in Tallahassee that the bill (SB 1890) “burdens and chills” free speech and association protected under the First Amendment.

The bill, which is part of years of efforts by lawmakers to clamp down on ballot initiatives, would place a $3,000 cap on contributions to political committees trying to put proposed constitutional amendments on the ballot. It was among 15 bills that DeSantis signed Friday and is scheduled to take effect July 1.

The ACLU was heavily involved in passing a 2018 ballot initiative aimed at restoring the voting rights of felons who have fulfilled their sentences. It said in the lawsuit that it has developed other plans for initiatives to “expand voter participation in Florida.”

The limit on contributions to political committees would make it difficult —- or, critics contend, impossible —- to collect the 891,589 petition signatures needed to put proposed constitutional amendments on the 2022 ballot. Political committees in the past often have spent millions of dollars to gather petition signatures and get required Florida Supreme Court approval of the wording of ballot proposals.

The Republican-controlled Legislature gave final approval to the bill on April 26. Supporters argued that the contribution limits are needed to stop deep-pocketed donors from financing ballot initiatives on policy issues that should not be in the state Constitution. They said such issues should be decided by the Legislature, not through constitutional amendments.

“This is not a direct democracy,” Senate Ethics and Elections Chairman Dennis Baxley, R-Ocala, said during a March committee meeting. “This government that we have is a democratic republic. The Constitution is the founding document to define the role of the relationship between a government and their people.”

But Democrats contend groups have turned to the ballot-initiative process because the Legislature has not responded to the wishes of the public. Among examples, they point to a 2016 constitutional amendment that broadly legalized medical marijuana and a 2020 constitutional amendment that will raise the state’s minimum wage —- with both of those drives primarily funded by Orlando attorney John Morgan.

“The citizens’ initiative process is a last resort for the people to demand a change in course when the government fails to listen —- yet it has been under attack by tone-deaf Republican lawmakers for years in their quest for omnipotence,” the Senate Democratic caucus said in a statement Friday night after DeSantis signed the bill.

Under the bill, contributions to political committees backing initiatives would be limited to $3,000 until the point when initiatives have met requirements to get on the ballot. After that point —- when backers have submitted enough petition signatures and received Supreme Court approval —- contributions would not face a cap.

The effect would be that contributions would not be capped during the final months of campaigns about ballot initiatives.

Senate sponsor Ray Rodrigues, R-Estero, said during a March committee meeting that allowing unlimited contributions after the point when initiatives are approved for the ballot is designed to address concerns about a landmark U.S. Supreme Court decision known as Citizens United. That 2010 decision allowed corporations and outside groups to spend unlimited amounts on elections.

“Under the Citizens United decision, I and others believed that if we were to attempt to continue that ($3,000 limit) past the point where it’s (an) initiative and to the point where it’s an actual referendum, we would be in violation of that Supreme Court decision,” Rodrigues said. “On the initiative process, we think that’s more easily defended.”

But the 18-page ACLU lawsuit said the contribution cap would violate the First Amendment.