Disney Cruise Line announced announced details regarding its upcoming fifth ship, the Disney Wish, in April, but waited until recent days to reveal what will be one of the most iconic staterooms at sea.

The multi-level Wish Tower Suite will have all the luxuries found in other exclusive cruise ship suites, but the location of this one makes it truly special. The suite, which is accessed via a private elevator, rests inside one of the ship’s two funnels. The funnel is there just for looks, as part of Disney Cruise Line’s penchant for retro oceanliner stylings, but for lucky inhabitants it definitely has a job to do.

Altogether the suite has two main bedrooms, a children’s room, a library that can convert to a bedroom, four-and-a-half bathrooms, and a large open concept living and dining area. The spa-like main bathrooms have double vanities, soaking tubs, and rain showers.

"Each of our theme parks has a majestic icon that captures our guests' imaginations," said Laura Cabo, portfolio creative executive, Walt Disney Imagineering. "On a Disney cruise ship, that beacon of magic is our signature red funnels. For the first time ever, guests aboard the Disney Wish will be able to book an incredible two-story suite that's actually located within one of our funnels. With the Wish Tower Suite, we are creating a breathtaking experience that continues our tradition of the most unique and enchanting accommodations at sea."

Billed as the first-of-its-kind accommodation, the funnel suite will offer large two-story windows looking towards the front of the ship. However, even with the impressive views, the real focus will be on the suite's interior. Custom lighting and audio effects will greet guests as they arrive. Disney has experimented with similar in-room effects in the past, but this looks to be an evolution of that technology, which was also seen on a proof-of-concept Walt Disney World bus at a fan event in 2016.

Wish Tower Suite also points to the more elegant evolution seen at Disney resorts. Moana-inspired artwork and touches are sprinkled throughout the expansive 1,966-square-foot penthouse. A large hand-crafted porcelain sculpture will be the centerpiece of the audio-visual greeting show that welcomes guests to the suite. Another very shiny sculpture draws inspiration from Tamatoa, the giant crab from Moana. Special star-like lighting effects featuring imagery from the film will provide the children’s room with the perfect nightlight. 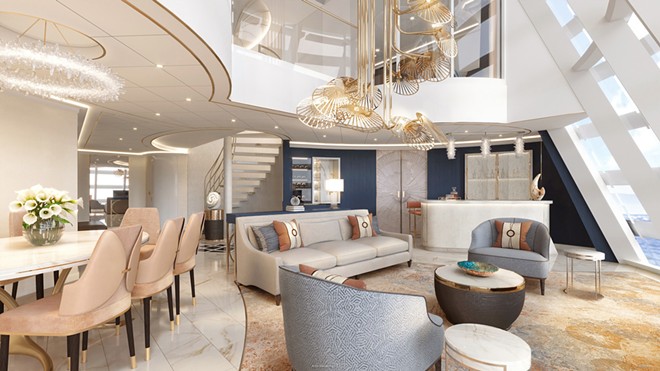 Other amenities include motorized curtains, complimentary internet access, and what Disney describes as “a deluxe menu of hypo-allergenic, feather and therapeutic memory foam pillows.”

For those looking to spend a bit less (and are willing to give up a pillow menu), 90 percent of staterooms on the Disney Wish offer ocean views. Giving up on the funnel doesn't mean giving up luxury. The Wish will also see an increase in the number of premium concierge accommodations when compared to previous Disney cruise ships.

The Disney Wish homeport will be Port Canaveral. Its inaugural season will include three and four-night cruises to the Bahamas, including Disney’s private island, Castaway Cay. Bookings open to the general public at the end of the month, with the maiden voyage currently scheduled for June 9, 2022.