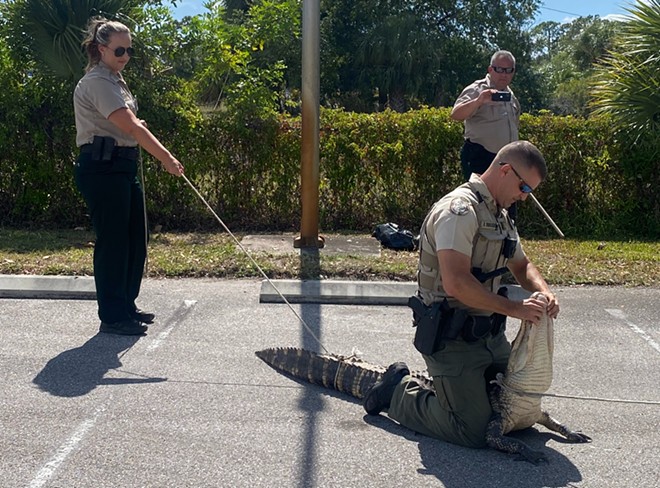 A seven-foot-long alligator was thwarted in its hunt for a Baconator on Monday, after authorities removed from the parking lot of a South Florida Wendy's.

Officials in Lee County report that they were called to the fast food chain in Lehigh Acres after customers were chased by the prehistoric beast in the parking lot.

He may have just been "hangry" for a cheeseburger, but he gave many quite the scare!

Alongside FWC, we wrangled the gator and safely relocated it. pic.twitter.com/OIiDHCmMJC


The gator was on the move, making its way to another parking lot across the highway, before it was wrangled by the Florida Fish & Wildlife Conservation Commission. The local fire department shared video of the gator strolling and joked that their response time might be "slightly delayed" as they waited for the gator to go about its business.


The 7-foot, 3-inch gator was relocated to a farm, according to the FWC.

It doesn't take the tempting smell of square burgers to lure alligators out into the open. Alligator mating season is in full swing, and they will continue to turn up in confounding places (as far as people are concerned). The FWC urges anyone who spots a gator in a place they likely shouldn't be to call 866-FWC-GATOR.