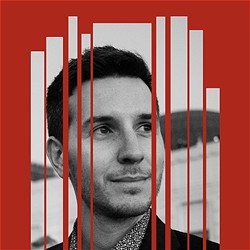 ExperiMental
Red Venue, $7
If you are one of the millions of people who were blown away by Derek DelGaudio’s In & Of Itself on Hulu, you’ll be mesmerized by the feats of mentalism being performed live and in person by Los Angeles illusionist Steven Nicholas. He begins this brand-new act by demonstrating that he’s memorized Pi to nearly 10,000 decimal places, before using playing cards and classic novels to seemingly prove that anyone is capable of such mental gymnastics.

A big part of Nicholas’ appeal is the way he makes it appear that his volunteers are the ones making the magic work, even as he subtly tugs their psychological strings. With only a handful of attendees at the preview performance, I got pulled onstage to participate more than once, and still have only the vaguest idea of how he got me to create a semi-successful “memory palace” in a matter of moments. I also really appreciated how he tied the beginning and finale of his show into a personal story about overcoming childhood challenges, and wish he incorporated more of that kind of autobiographical intimacy throughout his personable patter. He might not have his own Frank Oz-directed special (yet), but don’t underestimate the minor miracles Nicholas is capable of conjuring with his supercharged mind.

Lily Chrones was the ultimate “scene girl” influencer, with tens of thousands of subscribers watching them dispense makeup tips and relationship advice on YouTube before they were even old enough to drive. But despite being pretty and popular, Lily felt disconnected from their assigned gender ever since their traumatic first period. Only through introspectively interrogating her past acceptance of society’s expectations does Chrones finally learn to embrace their true identity.

All of the above sounds pretty intense, but Chrones shares their authentic genderqueer journey with lots of energy and humor, taking dead-eye aim at the pressure for tweens to become Insta-famous with slickly edited satirical video segments incorporating archival material from their original “livin4fashion” Youtube channel.

Girly Girl is an uneven but engaging show that shares a valuable message about self-discovery and self-acceptance. Lily is an appealing actor and entertaining mover, but not an outstanding dancer, so the lip-synced musical interludes (which would make for fun brief transitions) go on far too long; and dialogue with pre-recorded unseen partners suffers from a slight delay, sapping the story’s momentum. However, if you can overlook the rough edges, Chrones’ story may inspire you to align your outward and inward selves like Lily has.

Say hello to Jamie; Jamie is an alcoholic. Jamie is finally opening up about the formative traumas that led her to drink, in an effort to unburden herself of the demons that plague her. You’ve seen this kind of well-intentioned self-help testimonial at Fringe countless times before, and you can tell exactly where it's going … until writer-performer Donna Kay Yarborough takes a sinister turn deep in the woods, tearing away the gossamer veil that separates our reality from the shape-shifting shadows lurking beyond the corner of your eye.

It’s impossible to reveal more about Yarborough’s plot without jeopardizing the nerve-jangling joy that comes from discovering this psychological thriller’s chilling secrets; suffice it to say that fans of Stephen King, David Lynch and H.P. Lovecraft will find plenty to sink their canines into. Even if you aren’t usually a fan of horror, Yarborough’s understated intensity will suck you in as she weaves a richly absorbing world in only 40 minutes with nothing more than a folding chair and laser-focused gaze. You’ll hold your breath until you gasp at Yarborough’s final blackout, and you may find yourself glancing over your shoulder, lest the nightmare she summons follows you home.