The Infinite Conversation
BYOV: The Grove at Mead Botanical Garden, $12

After nearly four years of watching performance artist Sumner Mormeneo develop his innovative fusion of mime and video mapping at Orlando’s Immerse festival, the debut of his completed Infinite Conversation was high on my most-anticipated list for the 2021 Fringe. Everything I loved about those early excerpts remains, as the mute, white-faced Mormeneo interacts with a mind-melting flood of digital dreamscapes brimming with explicit nods to Charlie Chaplin and Salvador Dalí, as well as Buñuel’s Un Chien Andalou and Magritte’s Son of Man. Mormeneo’s quartet of high-powered projectors bring piles of cardboard boxes and hanging sheets to life, as furniture floats and flickering shadows dance to a pounding punk-pop soundscape featuring Kongos and Paramore.

If The Infinite Conversation were confined to those 20-odd minutes of intoxicatingly surreal sequences it would be a slam dunk, but the show’s running time is padded with long sequences of undermotivated movement which dissipates any momentum. Although the outdoor stage at Mead Botanical Garden makes for a bucolic backdrop, this show would be better served inside; I was far too busy swatting away swarms of bloodthirsty bugs to be able to follow the dense, jargon-filled pre-recorded dialogue that dominates too much of the show. Mormeneo is an exciting visual artist worth paying attention to; I just wish he’d trust the strength of his imagery to tell his story, and leave all the yammering to others. 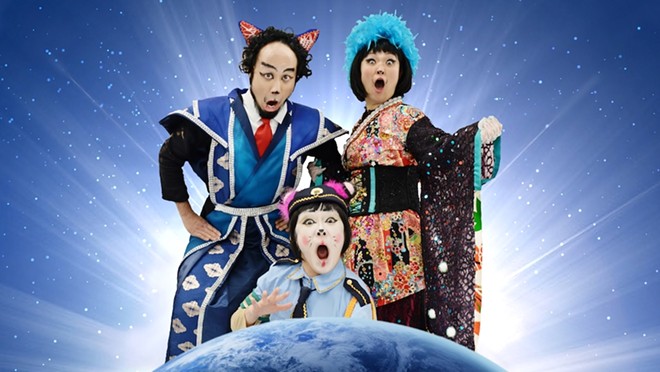 Mind Eater
Yellow Venue, $12
Japan’s Theatre Group Gumbo scored a blockbuster success at the 2019 Orlando Fringe with their outrageous fast food satire Are You Lovin’ It?, and although I laughed out loud, I was a bit bothered by the show’s reductionist take on Americans. This year they’ve revived their early hit Mind Eater, which was originally developed over 20 years ago for Australian and Asian audiences.

Happily, their mocking meditation on reincarnation and love feels far more universal, while still being every bit as funny. A jilted girlfriend desperate to lose weight; a lovelorn woman seeking a suicidal partner; and an altruist who takes “giving until it hurts” a little too far are the three souls whose slapstick life-cycles we observe, alongside a green-spangled emcee and floss-dancing angel. The underlying message – we are all connected, follow your heart – comes across in any language, and the medium (giant glowing jellyfish, flying internal organs and an overstuffed sumo suit) is like an anime fever-dream come to life on stage. It’s a minor miracle that Theatre Group Gumbo made it from Osaka to Orlando, but even if they’d only taken a cross-town bus, their ebullient acts of absurdism would earn my standing ovation.

Trigger warning: This is the toughest review I’ve had to write so far for the 2021 Orlando Fringe. On the one hand, Opera del Sol’s Requiem is an ambitious, talent-packed production with a vitally important purpose: bringing attention to America’s deadly opioid epidemic. The story, written and directed by Michael Knight, follows a Girl (Fabiola Rivera) as she turns from a car-crash victim prescribed pain medication so that she can function normally to a desperate addict who goes to rehab, gets assaulted, has a miscarriage and ultimately overdoses. All this is told through musical director Nishaa Johnson’s mash-up of opera standards by Mozart and Bizet, blended with hits by Radiohead, Evanescence and Miley Cyrus.

Requiem’s production values are solid; there are some spectacular singers in the cast; Rivera deserves a Purple Heart for her no-holds-barred star turn. Opera del Sol has even partnered with Project Opioid to distribute the life-saving drug Narcan after performances. So it pains me to say that the show not only didn’t work for me, but actively made me angry. Although there are many strong individual elements, they never gel into an aesthetically pleasing whole, much as the inconsistent audio mix overemphasizes the chorus’ pitchiest members. More troubling, the decision to anthropomorphize Addiction (Mathew Fackler) as a literal devil with red skin and horns is representative of a moralizing, victim-blaming thread running throughout the show that I found downright disturbing.

In Requiem’s world, addiction is caused by society defining pain as abnormal instead of encouraging people to simply grin and bear it, while physicians’ only purpose is to profit by dispensing death. Zero consideration is given to patients with genuine pain management needs, many of whom are now being driven toward more dangerous black market medications thanks to anti-opioid hysteria, and no aspersions are are cast on the pharmaceutical manufacturers or government entities who conspired to fuel the crisis while resisting safer options like medical marijuana.

Requiem was clearly born out of deep personal pain, and its heart is in the right place. But I’m afraid this Reefer Madness-esque propaganda could do more harm than good for vulnerable people who might be drawn to its message.