True blue: Amy Ray of Indigo Girls talks about heading back out on the road and playing Orlando's Frontyard Festival 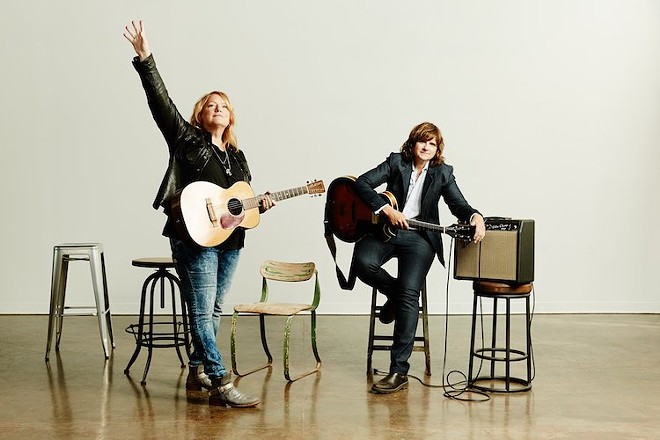 Indigo Girls, the duo of Amy Ray and Emily Saliers, are set to play the Frontyard Festival in downtown Orlando this weekend, and peeping the current schedule they look to be the last big touring act to do so.

If this is indeed the last hurrah for the Frontyard Festival, it's one hell of a note to go out on. The Indigo Girls are alternative-folk heroines, one of those rare groups that can balance cult cool with Grammy nominations and political activism. The duo have been making music together since 1985, when they burst out of the fertile Athens underground. From the brooding Southern gothic (that iconic cover pose!) of Strange Fire to the reluctantly-written but affecting pandemic song "Long Ride" (written at the request of NPR), Indigo Girls have stayed true to themselves with a discography brimming with quiet beauty,

Orlando Weekly reaches Ray on the telephone on Wednesday, as she's on the road en route to the tour kickoff in South Carolina. She's driving by herself, what she calls her "soft entry" to life on the road after a year spent at home. "I'm a private person," she says. "So, this is my concession to myself to like start slowly, tornado, you know." Ray is reflective but excited about returning to touring, long a way of life for her and Saliers, so we focused in on her feelings and thoughts about this strange moment in time..

Indigo Girls headline the Frontyard Festival on Saurday, May 29 at 8 p.m. Opening will be Amythyst Kiah. Tickets are still available through the Dr. Phillips Center.

How are you feeling about tonight and starting the tour …
I feel great. I'm glad people are getting back to it and I think we need to get out there and start doing stuff. … Kids need to be able to play together just for mental health … The vaccine is really the key for me. So once I got vaccinated, I felt a lot better.

But we're going to have safety protocols and all that stuff, so we're being careful. But it feels great to to play music live in the moment, not over the internet. I'm happy about it.

And this tour is just the two of you on stage?
I think our violinist is coming to whatever shows she wants to come to — Lyris Hung — and I think she's going to play those shows with us. She knows our material so well and we play so well together that we pretty much say like, "Whenever you want to come along. Please come." … It adds a lot to the show.

What will you be drawing from mostly from this for the setlist? Is it going to be sort of a career overview or focus in on Look Long …All over the place. We'll play probably four or five songs from the new record, but we definitely will be hitting a lot of the old stuff, I mean we always do, we never focus. I guess sometimes if we have a full band and we've just put a record out, we play a lot of the new record. But we don't have a band with us.

We made a list of songs for tonight, which we usually don't do. But we needed to practice, make sure we knew what we were doing, because it's been so long. So we made a list of what we were going to focus on, it's songs from every record. And then once we get our sea-legs, we'll just change it up every night and take requests and all of that jazz. But I think to start out we need to know what we're doing …

Last time you played Orlando, it was inside the Dr. Phillips Center and this time you'll be playing outside on the front lawn, which is such a summation of the moment. Do you have any memories of that show or any previous Orlando shows?
I remember a lot of our shows, I remember that one specifically, as far as the venue, and the dressing room. We have played a few different venues in Orlando, and we always have a really good time, and it's a great crowd for us, a super welcoming crowd. But all our crowds are, we just have a great crowd like anywhere, they're all very engaged and you feel the warm embrace. It'll be good. Orlando's one of the places we always play in Florida. We always play Orlando, because we feel like we get good people and vibes.

You've gone from barebones DIY touring to touring with an orchestra to now sort of doing a during a pandemic, which is a unique arc. How are you keeping perspective on this?
It's just one day at a time for us. Honestly, that's how we do it … I'm coming up to a toll, I have to pay cash. I have a Liberty coin, let's see if they'll take my …

You should just blow through it.
You know, I do that sometimes. But if I miss the toll and then they send me a notice and then I miss the notice … I definitely have flown through tolls, quite a few times. Last time I did it I wasn't home for a while and then the bill kept coming and it kept charging me late fees and I was like, "Oh man." But it's a good idea to go right through.

Glad to help. Does performing sort of feel new this time around?
I think it'll hit me when we start, I imagine, Because I think for us, we've been doing it for so long that to take a year and a half off doesn't really mess with the innate stuff about playing. You just can get back in the saddle and you do it and it all kind of comes back.

We have to practice the songs, obviously, and our stamina won't be there, because there's a lot of vocal stamina needed. It's very different when you play live than it is when you're just practicing in your house. But we've been pretty active and we've done a lot of livestreams and there's been a thread … I've recorded a bunch, and there's just been a musical thread. It's not like everything just went away. It doesn't feel like this crazy thing, it feels like part of the continuation of what's been going on in my life. I think if it was like five years or something that it would be crazy and scary.

I'm probably overthinking it, but I'm thinking back to the beginning of your career and maybe you're facing some very rowdy punkish audiences and it's like, "Oh, this seems like an adversity" and now it's like "pandemic."
Yeah, but our audience are so great that … Certainly we still have shows though, where it's like running the gauntlet. We're playing and it's getting really crazy, and we feel like we're just dodging bottles or something. That still happens every now and then, it's fine. But I think the pandemic, honestly, that was so much bigger than worrying about whether you play a show or not. When people were just dying everywhere, and then India and Brazil and  all the places that are still having such a hard time, and then even states within our own country that are still going through really hard times and poverty rates that are so high.

All of it, the adversity, is something that we're looking at it, the way everybody else that has some privilege is looking at it, which is "what can we do to help?" And, wow, you know, having gratitude that you had a place to be, food that you had, savings and all that stuff. So I think like, it feels like this is the least of our worries, whether or not we can get back in the saddle.

Exactly …
I think it's true though that when you get on stage again, and you share that initial response and hear people singing along … I think that's going to be quite exciting, and emotional for me. I can't imagine it so I don't know until it happens. But I have talked to some other musicians that were like, "Oh my god. It's crazy when you hear the response," and when there's bodies in the room or in the space outside, it's just so different than everything that's gone on.

I'm relieved that we have gigs, I feel thankful for them because, you know, some people don't yet and, I don't know, I think for us … I don't know how much longer we could go without playing gigs and still feel that thread in our lives to the music and the connection to what we do. So I think this was a break and it was a chance to get perspective, and spend time with the family, and practice new things, and think about life, and do a lot of chores at home that we couldn't do for the last 10 years. So that's all that was for us. That was the blessing part of it. But the world is suffering and that's a sad thing.