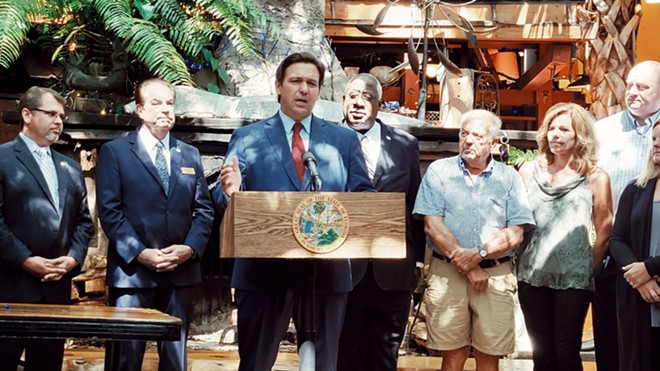 Using his line-item veto authority on the state's budget, which allows him to nix individual appropriations in the state's sprawling $100 billion budget for the upcoming fiscal year, DeSantis axed $150,000 in funding for The LGBT+ Center in Orlando. That money would have gone toward mental health and counseling services for Pulse shooting survivors, as Pulse survivor and local activist Brandon Wolf pointed out on Twitter.

Here’s @GovRonDeSantis in 2019, standing on hallowed ground, promising me that he would always support those of us impacted by the Pulse nightclub shooting.

Today, he vetoed mental health services for us. I will never forget. pic.twitter.com/huW8NJbVlP


Additionally, DeSantis vetoed state funding for the Zebra Coalition. That group plans to convert a portion of an unused hotel owned by Park Lake Presbyterian Church into housing for homeless LGBTQ+ youth. The state budget given to DeSantis appropriated $50,000 to the project. As state Rep. Anna Eskamani pointed out on Twitter, the move came just a day after he signed a bigoted bill targeting trans student-athletes.

Yesterday @GovRonDeSantis signed into law a bill attacking trans-kids. Now on the 2nd day of #Pride month he VETOES two #LGBTQ programs, one for homeless youth and the other for Pulse survivors' mental health.

He's a homophobic & transphobic man who should not be in office.