Since reopening after last year’s pandemic-related closures, Walt Disney World has been without FastPass, the skip the line program that’s complimentary for all guests. However, as other bits of theme park offerings have slowly been restarted, there’s been no indication FastPass+ will be offered any time soon. That has revived longstanding rumors that the resort is finally looking to scrap the problematic program.

FastPass debuted in time for the resort’s Millennial Celebration just over two decades ago. Since then, the concept of allowing some guests to skip the queue has become standard across the amusement park industry, but few have gone to the complimentary route that Disney’s program offered. Now Disney may be looking to scrap FastPass for a brand new, monetized program.

As early as 2007, there were indications that Disney executives were looking at ways to monetize FastPass. After Disney spent billions of dollars on upgrading Walt Disney World’s guest tracking infrastructure via the MyMagic+ initiative, the need to monetize FastPass took a backseat as the RFID equipped MagicBands provided a steady stream of improving per capita spending thanks to the newfound ease at purchasing items the credit card linked bracelets provided. Industry insider Jim Hill has stated that after the rollout of the bracelets improved in-park snack sales alone were enough to pay for the program despite its heavily reported cost overruns.

But as mobile ordering has become mainstream and the public becomes familiar with RFID payment systems, Disney has shifted away from MagicBands. As a result, as of the beginning of this year, on-site hotel guests no longer receive complimentary MagicBands. Disney has instead begun heavily promoting its mobile app, which offers many of the same benefits as the RFID bracelets.

Brayden Holness of Disney news site Mickey Views shared details on the latest rumors regarding a rumored paid FastPass style program. According to his reporting, the skip-the-line program will swap out of the FastPass name for something new. In addition, it may include multiple tiers, similar to paid FastPass programs available at some international Disney parks.

Mickey Views and Holness have become a major source of first reporting on numerous high-profile projects across Disney Parks. His reporting on this project aligns with details industry insiders have shared in other public forums.

Holness explained to the Orlando Weekly, the unique situation Disney currently finds itself in may be why they are considering paid passes.

“Disney faces a rare moment where they have the ability to establish a 'new normal' with their park operations," he said. "There currently is no FastPass, so introducing a new or modified system wouldn't require canceling existing perks as it would have in the past.”

FastPass+ wasn’t without its troubles. The program forced guests to plan their theme park visits months in advance or face hours-long lines at even mediocre attractions. Things became even more complicated when planning dining reservations, hotel stays, and character meet-and-greets. Some guests resorted to multicolored spreadsheets and early morning sessions trying to get reservations for their favorite attractions. Those who weren’t familiar with the complicated system were often left with few options in the way of ride and dining reservations once they arrived at the resort.

The current ride reservation system allows Disney to easily predict crowd levels, allowing for more accurate labor and supply needs, therefore decreasing certain costs. The parks now have a park reservation system, which was rolled out as part of the pandemic-related protocols but may remain in place moving forward.

The new system, according to Holness, may allow for some of the spontaneity theme park visits once offered.

“FastPass+ is an excellent system for the few who work to understand the system and take advantage of it to skip the lines for free. For the average, high-paying guest Disney is after, they just want something that works," he said. "A system that demands you book rides 60 days in advance was bound to leave many dissatisfied. I think a paid FastPass system has the potential to bring back a degree of spontaneity that MyMagic+ took away in the last decade.”

According to Holness’ reporting, the new program will be part of a two-step process to completely overhaul how queues operate with Disney World theme parks. First, it will be the introduction of the paid skip-the-line program. It would be similar to other theme parks in allowing access to the benefit without having to reserve the rides in advance. Second, on select attractions, the standby queues would shift to a virtual queue system requiring guests to use their cellphones to reserve a spot in line once they’re inside the theme park. In recent years, virtual queues have been used on multiple tentpole attractions, including Rise of the Resistance in Star Wars: Galaxy’s Edge and the recently opened Spider-Man attraction within Disney California Adventure.

“In the last decade, Disney was very careful to keep mobile phones as optional as possible. We are now in a smartphone-dominated marketplace,” explained Holness. “With virtual queues, Disney can keep guests out of lines completely and let them be engaged by the lands themselves. While I expect Disney to continue trying to accommodate all guests, there will be clear benefits to those who are tech-savvy. This will continue to be especially true for those grabbing spots in virtual queues.”

Disney is also still moving forward with its own artificial intelligence-powered park touring app, Disney Genie, which will allow for a more dynamic real-time reservation style queuing system. However, it’s unclear how the paid skip-the-line program and the virtual queues will interact with Disney Genie.

Holness believes the paid FastPass program will have dynamic demand-based pricing ranging between $100 and $300 per guest per day. These prices are slightly above the per-day cost of skip-the-line passes sold at Universal Orlando. SeaWorld Orlando’s version, bundled with reserved seating at select shows, costs about half of Universal Orlando’s version. Both feature dynamic pricing that changes per day based on expected crowd levels. Similar paid queue programs also exist at Six Flags and Cedar Fair parks. In 2019, another insider, Martin Smith, stated at that time the plan was to implement three different paid FastPass packages.

Shanghai Disneyland eliminated all complimentary FastPasses last year when it rolled out paid Disney Premier Access packages. Those skip-the-line packages are grouped by ride popularity with a package of the least popular attractions going for just under $30 while the most expensive package initially cost nearly $70.

The updates at WDW come at a time when Disney is looking to pull more revenue from its parks as other segments of the company reorganize to face a rapidly changing reality.

Disney CEO Bob Chapek, who took the helm at the onset of last year's pandemic concerns, hasn’t been shy about his plans to go after higher-spending multi-day guests at the expense of annual passholders. In August, Chapek explained his thinking on this when he explained to shareholders that “someone who travels and stays for five to seven days is marginally more valuable to the business than someone who comes in on an annual pass and stays a day or two and consumes less.”

Disney has used the pandemic as an opportunity to shift many of its longstanding programs, including the annual passholder program at the California resort. In Florida, annual passholders can still receive their benefits, but new pass sales have been suspended since last spring.

Limiting the number of passholders in the parks may also improve guest satisfaction. Smaller crowds allow Disney Parks to operate with fewer employees and less maintenance, lowering costs while increasing guest satisfaction rates. Disney filed patent applications for dynamic virtual queues last month. In the application, Disney notes having guests wait in queues deprives other attractions of potential revenue. Virtual standby queues would enable guests to spend more time in gift shops and dining, which in theory could improve per guest spending even among those who do not purchase the paid FastPass program

“I think the goal of these rumored changes would be to increase per-guest spend,” Holness explained. “If Disney can increase how much each guest is spending, they could theoretically maintain attendance restrictions while reaching new levels of profits. Huge crowds were a big guest complaint up until March of last year.”

Now, as the pandemic subsides, Disney is at crossroads. It can return to the way things were, with large crowds and complicated reservation systems, or it may be time for a ‘new normal,’ even if it means monetizing benefits previously offered for free. No timeline has been given on when the rumored paid program will launch, but the resort expects record crowds during the 50th-anniversary celebration that will launch this fall and last through early 2023. 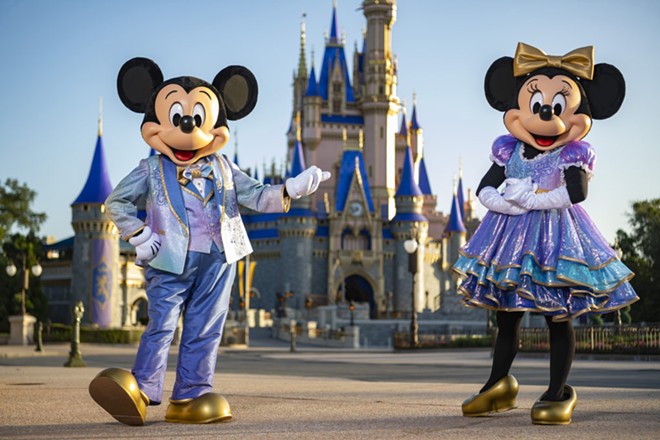