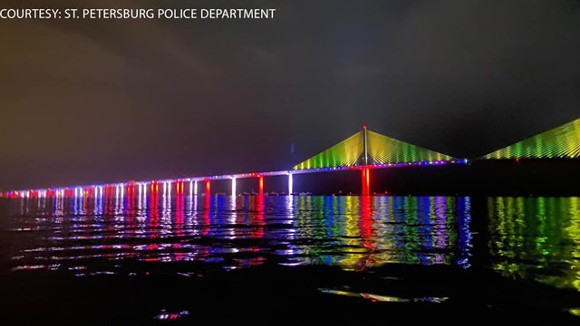 UPDATE: A spokesperson for the office of Florida governor Ron DeSantis announced that Pride month light displays on the Acosta Bridge in Jacksonville would be reinstated.


"The bottom line is, lights will be back up tonight,"  Taryn Fenske told the Times-Union.

Fenske said it was unclear who issued the order to remove the lights or why, but noted that the lights would be back on this evening.

June is Pride month, and Florida seems hell-bent on celebrating by looking as homophobic as possible.

On Tuesday, a day after Jacksonville’s Acosta Bridge was lit with rainbow lighting for Pride, the Florida Department of Transportation ordered the Jacksonville Transportation Authority to remove the lights, saying they were “out of compliance with their existing permit,” reports The Florida Times-Union.

“This afternoon the FDOT informed the JTA that our scheduled color scheme for the Acosta Bridge is out of compliance with our existing permit. The JTA will comply accordingly," according to a statement from the JTA to the Times-Union.

FDOT’s bridge lighting policy allows the department to refuse any requests it deems offensive or not in the public’s best interest, says the paper.

This is puzzling, especially since FDOT has previously allowed specialized lighting on the Acosta Bridge for things like autism awareness, child abuse awareness, mental health, the first day of spring, lupus awareness, Breast Cancer Awareness Month, the NFL draft, and even Jacksonville Jaguar home games, among other things.

U.S. Rep. Charlie Crist, who is also a gubernatorial candidate and represents a city that hosts one of the largest Pride events in the country, sent a letter to DeSantis on Monday requesting that the Skyway Bridge be allowed to be lit up in Pride colors, as it has been in previous years.

“This small but meaningful action would bring goodwill and optimism to my constituents and the entire State of Florida at a time when we need it most,” said Crist. “It would be a thoughtful way we can all safely mark the occasion and send the message that regardless of race, creed, religion, color, gender identity, or sexual orientation, we are all in this together.”

As a reminder, we're not even halfway through June. To recap, so far this month the governor has already signed an anti-transgender sports bill into law, scrapped mental health funding for Pulse survivors, and now he’s going after gay bridges.