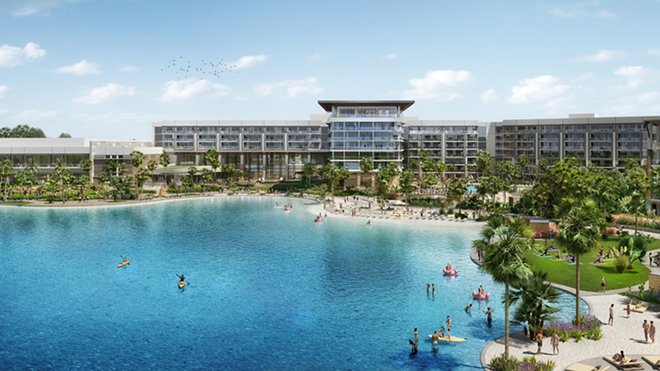 In Florida, you’re never more than sixty miles from the beach, but a new company wants to make beach-going even easier. Crystal Lagoons is in the midst of a rapid expansion that will include nearly half a dozen new lagoons across Central Florida, but their most exciting project is in Arizona.

Unlike previous projects, where the lagoons were just an amenity of a community or resort, Crystal Lagoons will take center stage in Arizona. The Crystal Lagoons Island Resort will focus nearly every facet of the resort on the impressive artificial water feature.

Elsewhere in Arizona, the pools are surrounded by luxury homes or high-rise condos.  This lagoon's shores will be several Mattel-themed attractions, including the world’s first Hot Wheels-themed roller coaster.

Mattel has been working on licensing its large stable of intellectual properties for years. While Hasbro has seen huge crossover success with franchises like Transformers, Trolls, and My Little Pony, over at Mattel, many of its IPs remain strictly in the toy aisle.

The partnership with Crystal Lagoons allows the two companies to lean on each other in a bid to create something far larger than either would be able to realize on its own. Along with a Hot Wheels-themed roller coaster, the Mattel Adventure Park at the Crystal Lagoons Island Resort will also feature multiple go-kart tracks themed to Hot Wheels, a life-size Thomas the Tank Engine, and an immersive themed dining experience linked to a yet to be announced Mattel property.

“A passion for innovation and excellence has driven the design of our venue. Mattel shares our vision and sets the platinum standard for the concept of play. We are thrilled to create the country’s first Mattel Adventure Park in Glendale,” said resort president Mark Cornell. 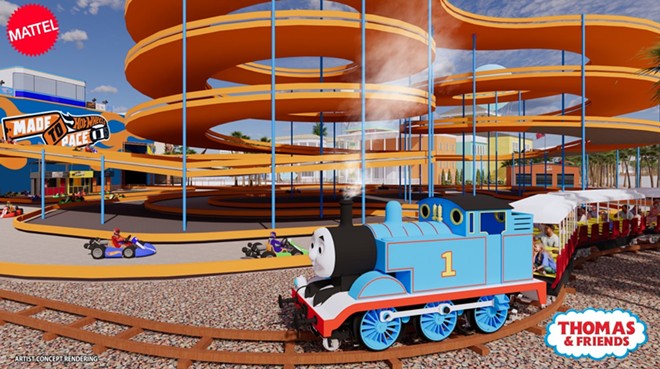 In 2019, Mattel announced plans for a global chain of family entertainment centers with many concepts similar to those now being confirmed for the Arizona park. The 2019 project was to see its first entertainment location open in 2020, but that project has since been put on hold.

The park will also feature two hotels, retail, a flying theater, and a balloon that will take guests nearly 40 stories into the air. An Aerophile Aerobar, a bar-like structure attached to a balloon, will aid those wanting to kick their drinking up a notch 130 feet above the ground. 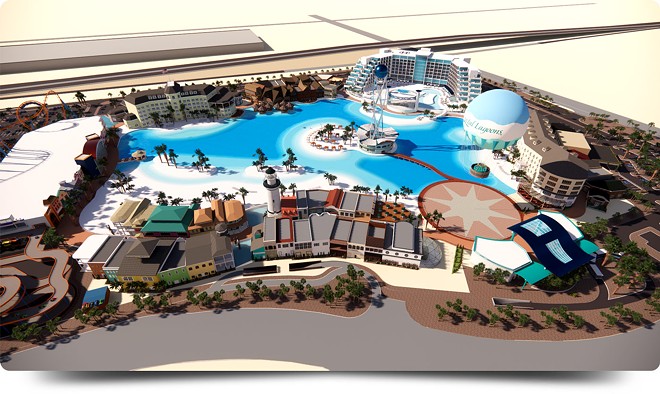 In Florida, five Crystal Lagoons are in the work: one in The Villages, another in Orlando, and yet to be disclosed locations in Kissimmee, Seminole County, and Lake County. All of these will be open to the public. All of Florida's currently operational lagoons are private.

Previously Crystal Lagoons were announced for Lake Nona and the upcoming Evermore Resort near Disney World. The mixed-use development O-Town West was to include a Crystal Lagoon but it was canceled as that project morphed from a high-end destination development into a mix of strip malls and standard housing options.
In speaking with the Daily Commercial, a spokesperson for Crystal Lagoon noted that at least some of the upcoming Central Florida lagoons might feature the company’s new Hot Reef, a new heated water system the ensures the lagoons remain comfortable year-round. They also mentioned the possibility of a removable dome that can keep the lagoons open during rainy days and colder times of the year.

It’s unclear if the upcoming Florida lagoons will feature any of the Mattel-branded offerings. Other than a few nods at Disney World, Mattel hasn’t had a major presence in Central Florida since it sold the Circus World amusement park in 1983.


The Crystal Lagoons Island Resort in Glendale, Arizona, will open in 2023 ahead of the city’s hosting of the Super Bowl. That same year will see the first three of Central Florida’s lagoons opening, with the Seminole County and Lake County locations opening at a later yet to be announced date.