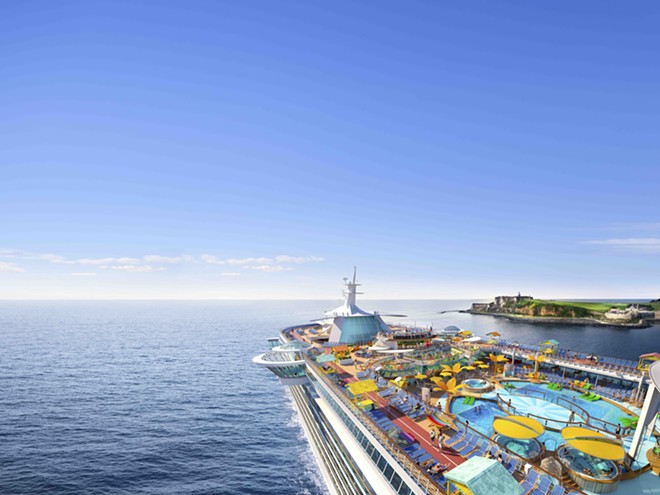 Even as New York and California lean on technology to ensure everyone remains safe, politicians in Florida have done the exact opposite by banning private businesses from requiring guests to provide proof they’re vaccinated.

The ban has thrown an unexpected speed bump in the already chaotic restart to the cruise industry. Royal Caribbean plans to honor Florida’s law while also ensuring the safety of passengers on board, by irritating unvaccinated guests into staying away.

Royal Caribbean delays first cruise from Florida after crewmembers test positive for coronavirus
By Alex Galbraith
Blogs
Throughout the 10-minute-long video, Fain came out in strong support for vaccines, calling them the “key to everything” and praising the role the U.S. has played in their development and delivery. Fain compared getting the vaccine to not littering; it’s a small individual action, but when large groups do it, it has an outsize impact.

“Getting one today not only protects you from the virus, it protects the whole society and allows us to get back to normalcy,” he said, before turning the topic to people who refuse to get the vaccine.

According to the Seattle Times, Royal Caribbean announced in late May, via their website, that they would require all adults on board visiting The Bahamas and Alaska to be vaccinated, but the requirement for Flordia cruises to The Bahamas was rescinded in early July. In May, Florida passed a law banning "vaccine passports."

In the video to travel agents, Fain explained that for ships where children are uncommon, including on Celebrity, Silversea, and some international Royal Caribbean ships, the company plans to ensure more than 95 percent of those on board will be vaccinated. Other ships will see the vast majority of adults vaccinated. Royal Caribbean does welcome supervised children on all of its ships.

Among the ways it’s doing this is by requiring multiple tests for adults who refuse to show proof of a vaccine. A negative test from within the past 72 hours is required, followed by a second test at the terminal. A third test will be taken within 24 hours before disembarkation. Tests two and three will be conducted by a third party contracted by the cruise line. Those two tests will cost a combined $136 per person, charged to the guest’s onboard expense account.

On their website, Royal Caribbean also warns that all guests are subject to restrictions put in place by local authorities at ports the ships visit and notes that “it is reasonable to expect that unvaccinated guests will be subject to stricter protocols than vaccinated guests.”

Fain believes the safety procedures are enough to make cruising safer than land-based activities due to creating a “bubble” on the ships. He called out theme parks and events, claiming that “they can’t do extensive screening for something that’s only going to last for a few hours. All they can do is implement protocols to limit interaction.”

That’s accurate, at least in Florida, though theme parks and venues in other places are working with groups like Clear to require vaccination proof before admission.

After more than a year on pause, the awakening of the cruise industry has meant rules and plans change almost daily as cruise lines react to the latest from government officials along with revisions from the CDC. This constant evolving of what to expect has confused many potential cruisers. Fain acknowledged that even he struggles to stay current with the rapidly changing landscape of rules and plans, but he believes things will begin to calm down as reopenings start to occur.

On their website, Royal Caribbean states they “are happy to provide” refunds to anyone unwilling to follow the new safety protocols.