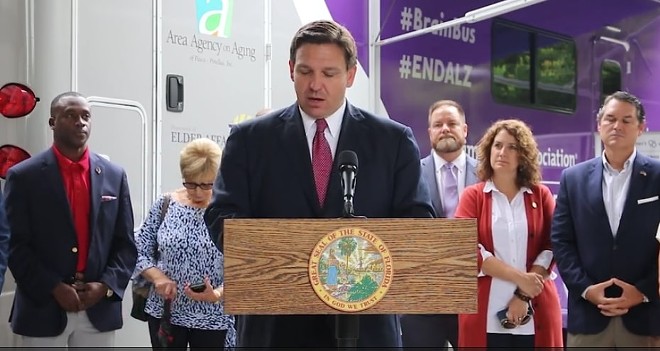 Two years after then-Senate President Bill Galvano made a priority of building and expanding toll roads, Gov. Ron DeSantis on Thursday signed a bill that scraps the controversial plan.

Without comment, DeSantis' office announced Thursday night he signed a measure (SB 100) that repeals what Galvano dubbed the Multi-use Corridors of Regional Economic Significance, or M-CORES, program —- though the state is expected to still move forward with two projects that are at least somewhat similar to what Galvano envisioned.

The biggest effect of the bill signed Thursday is that it will do away with the plan to build a road from Collier to Polk counties.

But similar to the Galvano plan, it will require a project designed to extend the turnpike from its current western end at Wildwood to a point to be determined by the Florida Department of Transportation. In addition, the bill will require a "controlled access" road project aimed at “free flow” of traffic on U.S. 19 from the Suncoast Parkway to Interstate 10 in Madison County.

Related Florida Senate approves the largest Florida highway expansion in 60 years. Environmentalists say it would be devastating: Roads to ruin

Florida Senate approves the largest Florida highway expansion in 60 years. Environmentalists say it would be devastating
Roads to ruin
By Xander Peters
News

“By signing Senate Bill 100 into law, Governor Ron DeSantis has helped in taking action to responsibly address both short-term and long-term infrastructure needs in our state, and I thank him for recognizing the need for this important legislation,” Ananth Prasad, the association’s president, said in the statement.

Galvano, R-Bradenton, touted the M-CORES projects as a way to help handle future growth, and he linked the roads with adding broadband and other infrastructure in rural areas that need economic development.

But the plan drew opposition, in part, from environmentalists who contended it would lead to urban sprawl and damage natural habitats.

With Galvano replaced in November by Senate President Wilton Simpson, R-Trilby, lawmakers voted almost unanimously during this spring’s legislative session to rip up the 2019 plan.

Senate Transportation Chairwoman Gayle Harrell, a Stuart Republican who sponsored this year's bill, said in March that the COVID-19 pandemic required a reevaluation of state priorities and that her proposal drew upon recommendations of task forces that looked at the road projects.

“The pandemic has really required that we reevaluate things,” Harrell said. “And one of the things that I really believe that is both a policy and a budget issue is M-CORES.”