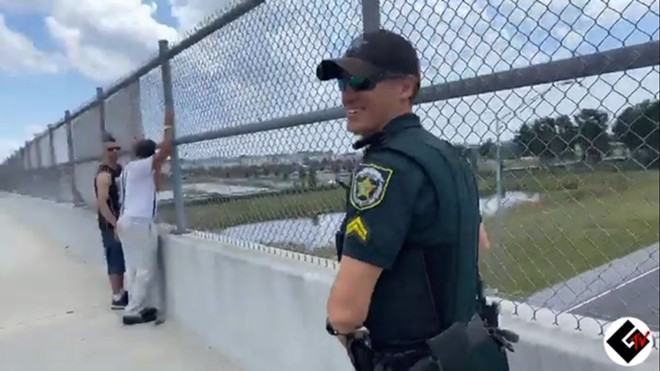 The Orange County Sheriff's Office has responded to a complaint that one of their officers was "too friendly" to a group of neo-Nazis hanging an anti-Semitic banner over a highway earlier this year.

Members of the Neo-Nazi group Goyim Defense League hung a banner over the highway that referred derogatorily to the actions of mohels during a traditional bris. The banner hanging was responded to by members of the Florida Highway Patrol and at least one Orange County deputy. While the FHP declined or ignored the anti-Semites' request for water, an OCSO deputy gave the group water bottles and yelled "Stay hydrated!" as he walked away.

A video on a racist, YouTube-style website shows white supremacists dropping an anti-Semitic banner off a highway overpass.

An unidentified @OrangeCoSheriff corporal brings the men water in an overtly friendly manner, calling into question whether this is a signal of support.


A complaint was filed alleging that the deputy's actions were implicit support for the neo-Nazis. OCSO responded to the complaint and called it "unfounded" in a message to Orlando Weekly.

"Complainant alleged the accused acted unprofessionally, specifically 'too friendly” during a call for service," the organization wrote in their report. "A review of incident was conducted and no policy violation was noted."

Reached for comment by Orlando Weekly, the department said they in no way support the message of the GDL or their ilk.

"We want to be clear: The Orange County Sheriff’s Office strongly denounces any group that would act out of hate and against any members of our community – even if they are exercising their First Amendment right to free speech," they wrote.