Confused homing pigeons in Florida shut down I-95 exit 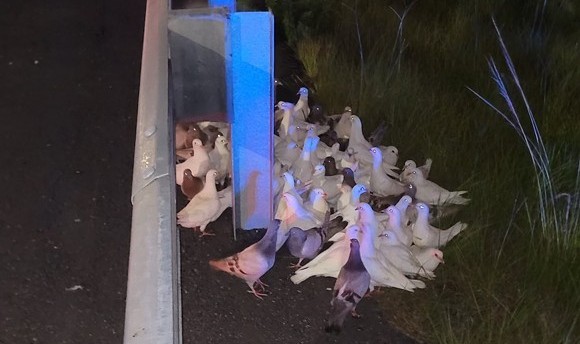 Another day in Florida, another crazy wildlife story.

On Tuesday night, the Volusia County Sheriff's Office began receiving phone calls from drivers who said that white doves were wreaking havoc on an exit along Interstate 95.

After state troopers, sheriff's deputies and animal control workers went to the scene, they found that a crate of 100 homing pigeons had fallen off a truck.

Volusia County: FHP flocks together to save a crate full of pigeons that fell off of a truck, onto I-95. Thanks to Tpr. Wray and Trp. Clark for protecting our citizens and our feathered friends. 73 pigeons rescued. pic.twitter.com/shpQrmT6NH


As we all learned from G.I. Joe, knowing is only half the battle. The issue of how to move the birds from the exit was a tough one. The pigeons steadfastly refused to move, as they roost at night. The bright lights of cars were startling the settled pigeons, causing them to fly at oncoming traffic. Workers and law enforcement had no choice but to close the exit for three hours while they captured the confused birds.

Authorities were able to rescue 73 pigeons, but the birds weren't banded so their owner is unknown, per the Associated Press.