Kennedy Space Center is slowly returning to normal, and that means attractions are in the works

After a year of uncertainty, the Kennedy Space Center Visitor Complex is slowly returning to normal. The Brevard County attraction recently moved into the next phase of its reopening.

With summer crowds returning, hours have been extended and dining options expanded. Spaceperson, the awkwardly named walk-around character, is also making more appearances throughout the day. Select live presentations, including the "Eyes on the Universe" show, are also returning.

“We have seen a big increase in demand for admission tickets as well as launch viewing packages over the past few months at Kennedy Space Center Visitor Complex,” said Therrin Protze, COO of Kennedy Space Center Visitor Complex. “We are thrilled that the country is back on a healthier path and that the CDC guidelines now support our opening up more options to inspire, educate and entertain our guests.”

Last year’s closures were a major setback after a decade of massive improvements for the historic attraction. An ambitious 2010 Master Plan called for a near complete re-imagining of the Visitors Complex.

Things were kicked into high gear in 2013 when a new facility was unveiled as the permanent home to the Space Shuttle Atlantis. That award-winning attraction was quickly followed by a museum-style attraction that is home to the United States Astronaut Hall of Fame.

At the beginning of 2020, things were looking up with the Apollo/Saturn V Center fresh out of a multi-million-dollar upgrade. A massive bronze statue dedicated to the Apollo 11 mission was unveiled the year prior. Just months after the grand reopening of the center, however, it was forced to close.

A new play area was in the works, and another rocket was slated for the rocket garden. Both of those projects were delayed until earlier this year but are now open. With the resumption of bus access in March to the Apollo/Saturn V Center, it was also able to finally welcome guests once again. 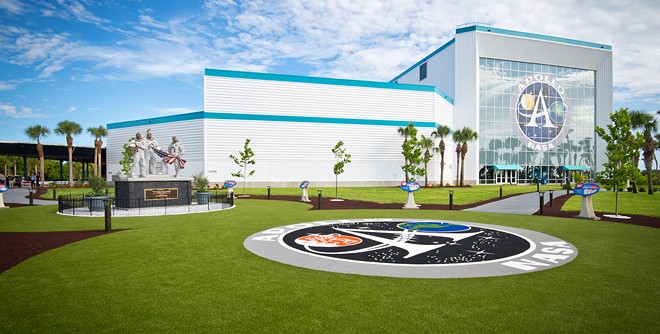 Kennedy Space Center Visitor Complex hopes to get back on track with its previous expansion plans.

Senior Director Howard Schwartz told Orlando Weekly that the plan is constantly being updated and more attractions are in the works.

"Our official Master Plan is always evolving. We continually look at the current environment – including guest interests, and NASA plans for now and the future – and modify how we’ll elevate the guest experience here at Kennedy Space Center Visitor Complex," he said.
"This year we also welcomed a new rocket – the Delta II – to the Rocket Garden, and soon will be announcing our next big attraction, which is currently under construction. All of these new additions occurred during the pandemic," he continued. "Telling the NASA story to our guests is the number one priority and it was important for us to continue to expand these opportunities, even during the pandemic."
A massive new exhibit facility is currently under construction next to the Rocket Garden. The exhibit, previously reported by Florida Today to be called Gateway, will focus on the future of space travel. It’s expected to open in 2022. Previous plans also called for a flying theater, an upgraded nature walk, and a nighttime lagoon show.

There are also several special events planned for the coming months. Later this week on July 8, the tenth anniversary of the final space shuttle mission will be remembered with special events throughout the day. In November, a new class of astronauts will be inducted into the Hall of Fame.