It is one of the largest presences Central Florida's largest employer and theme park operator has committed to off of its Reedy Creek Improvement District in nearly half a century and, thanks to public documents, the story of how it has happened has played out before our eyes.

A gargantuan screen will greet visitors to the district.The ten-level, 880 space parking structure is part of the transformation imagined for the entrance of the I-Drive Resort Area that Mango’s Tropical Cafe first announced in 2013.
It almost didn't happen this way. Parking for Mango’s Tropical Café was initially planned to be offsite in a field just across Sand Lake Road. Early 2014 Orange County records reveal Mango’s had initially tried to get a variance to use that site as overflow parking. However, shortly thereafter a property became available that would change everything.

Records show Wallack Holdings scooped up the single-story big box retail site that formerly held a Walgreens for $5.3 million in early 2014 and announced plans for a parking garage on the site. 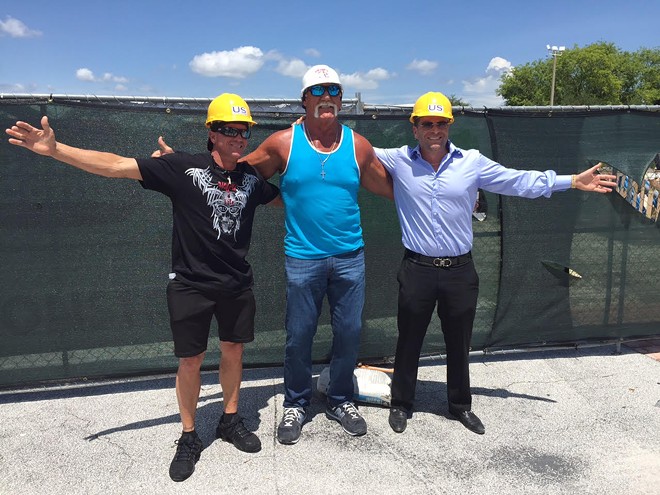 Between Mango’s and the developer across the street, this long-overlooked section of International Drive was now becoming the epicenter of the updated vision for the corridor, as laid out in the a Vision Plan led by Orange County. The plan called for mixed-use high-density developments combined to create a pedestrian-friendly district.

The 2040 Vision plan was launched by then-Mayor Teresa Jacobs and followed by current Mayor Jerry Demings. While the neighborhood directly around the digital art installation is still home to many single-story buildings with surface parking, the area could quickly evolve into a walkable urban village linked to other pedestrian-friendly sections of International Drive further south.
Disney's surprising announcement will have long-lasting effects. The 30-foot high and 337-foot long screen is possible thanks to a January 2020 change in zoning regulations for the corridor in connection to the Vision Plan. Regulations require digital screens to showcase art within the public realm, with a smaller section of them allowed for sponsorship. That means Disney can celebrate its attractions at Walt Disney World on the 9,931 square foot, multi-story screen. 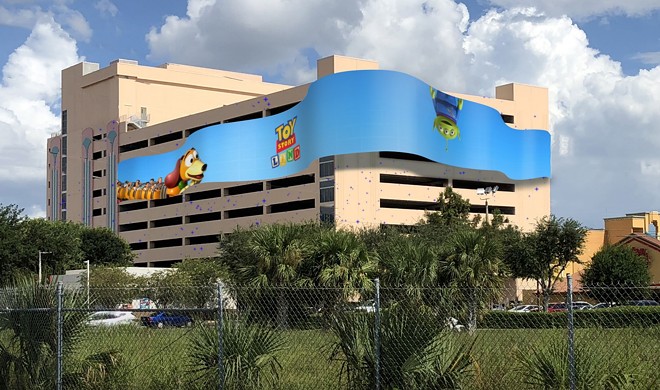 Winter Park-based architecture and design firm AOA is spearheading the design, working with Mitsubishi, who will manufacture and install it.

Concept art for the screen includes a scene featuring attractions in Toy Story Land and a second Star Wars-focused scene. A smaller section of the ribbon-like screen will note that tickets to Disney World can be purchased in a Disney retail store that will be located at the base of the structure. So far, Disney hasn't shared details on what will be included in this retail store.

"The installation will be a technological medium that allows for continuously refreshed dynamic and subtle moving displays of works of art that feature the Walt Disney Company’s iconic characters and franchises, as well as the Walt Disney World® Resort’s famous attractions," the company wrote in their application for the sign. "These works of art are timeless and recognizable. The dynamic art display will serve as an energizing art installation furthering the I-Drive 2040 plan and enhancing the FDOT interchange development with visibility from I-4. It will be an I-Drive icon at the entrance of Sand Lake Road furthering the Orange County Dynamic Art program’s intent and purpose to promote broader scale works of art visible to the public, encouraging creativity, and developing a strong sense of place in Orange County." 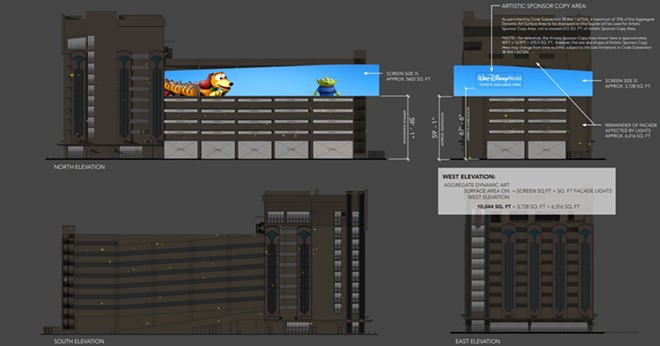 Facing north towards I-Drive/ Sand Lake Road and west towards I-4, the screen will cover much of the less decorated sections of the garage, but it’s not the only improvement to the structure. Artwork submitted to the county seems to show pixie dust style twinkle lights on all but the east side of the Hollywood Plaza. These lights are expected to accent the artwork featured on the screen. The east side, facing International Drive, will remain mostly untouched, other than possible updates to the retail store facades.

Less than 700 feet from the exit off I-4, Disney’s installation renders Hollywood Plaza the area's visual anchor. The interchange of Sand Lake Road and I-4 will be completely reworked as part of planned updates to the interstate. The Disney digital art display will be completed in 2022.