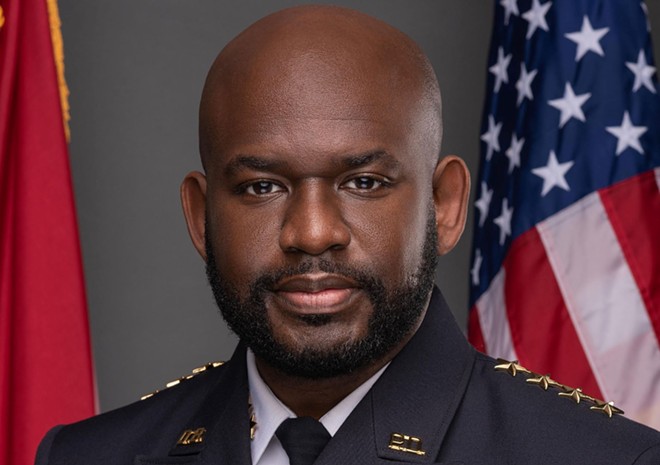 Daytona Beach Police Chief Jakari Young tore into U.S. House Rep. Mike Waltz for sharing an update on the condition of a DBPD officer who was shot in the head last month. After Waltz shared that officer Jason Raynor was awake and speaking, Chief Young said the congressman has "no right" to divulge that and said Waltz was engaging in "nothing more than politics."

The angry response was prompted by a tweet from Waltz, who claimed Young as his source on Raynor's condition.

"Spoke to the Daytona Beach Police Chief and he says Officer Raynor is speaking and opening his eyes," Waltz wrote on Twitter on July 8. "His mother felt comfortable leaving the hospital for the first time in weeks. Nothing short of a miracle!"

Spoke to the Daytona Beach Police Chief and he says Officer Raynor is speaking and opening his eyes. His mother felt comfortable leaving the hospital for the first time in weeks. Nothing short of a miracle! https://t.co/iCSEjhs4ba


A clearly upset Young responded this morning and apologized to the Raynor family.

If I or @DaytonaBchPD intended to give an update on Officer Raynor’s status we would have done so ourselves! @michaelgwaltz had NO RIGHT to tweet this! I apologize to the Raynor family for this egregious violation of their trust. This is nothing more than politics at its best. https://t.co/HLa8Pdd5U7

"If I or [DBPD] intended to give an update on Officer Raynor’s status we would have done so ourselves!" he wrote. "[Waltz] had NO RIGHT to tweet this! I apologize to the Raynor family for this egregious violation of their trust."

Waltz apologized to Raynor's family and the department following the tweet-lashing from Young.

My sincerest apologies to the Raynor family and @DaytonaBchPD. I was excited at the prospect of good news for Officer Raynor and did not intend to share info that wasn’t meant to be released. Continuing to pray for a speedy recovery. https://t.co/6Dj6Ce7VGL


Following the shooting last month, police shared bodycam footage of the interaction between Raynor and a man police believe to be 29-year-old Othal Wallace. Viewers see from Raynor's relative point-of-view as he approached a man sitting in a vehicle. When the man stood up, Raynor repeatedly tried to force him to sit back down.

THREAD (1 OF 2): A $100,000 reward is now available for anyone who can help authorities locate the man who shot one of our officers in the head earlier this evening.

The man we're looking for is located in the video below. His name is Othal Wallace. He's 29 years old. pic.twitter.com/hYHNqVLg8C

“Come on, now, come on, now. Don’t do this,” the man alleged to be Wallace said in video.

After a scuffle, a single shot rings out and the camera falls to the ground along with Officer Raynor. Wallace was captured in a treehouse near Atlanta, Georgia several days later. He has been indicted on attempted murder charges in Volusia County.

UPDATED 2:30 ET: This story was updated to include an apology from Waltz.
–
Stay on top of Central Florida news and views with our weekly newsletters, and consider supporting this free publication. Our small but mighty team is working tirelessly to bring you Central Florida news, and every little bit helps.