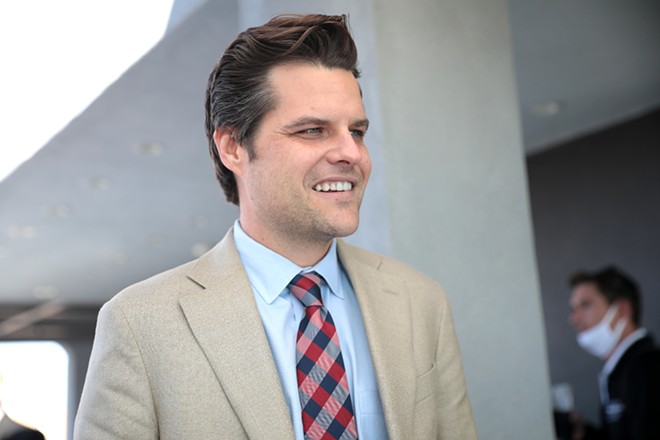 What do a California event venue and most of the GOP have in common? They want nothing to do with Matt Gaetz.

The Florida congressman is searching for a venue in the other Orange County after a hotel there gave Gaetz and Congresswoman Marjorie Taylor Greene's "America First" rally the boot.

While the Pacific Hills Banquet & Event Center in Laguna Hills initially allowed the booking, they pulled the plug after learning that Gaetz and Taylor-Greene were speaking. The first of their nationwide rallies kicked off at retirement home-cum-city The Villages in May.

"As soon as we found out who the speakers were we immediately canceled it," said manager Javad Mirtavoosi in an interview with the Orange County Register."We just want to stay clear of that."

Taylor-Greene's spokesperson told Business Insider that they are seeking a new location for the July 17 event.

"Although the accounting of the venue cancellation is totally inaccurate, we're very close to securing a location that will proudly host our America First Rally with Congresswoman Greene and Congressman Gaetz," they said.

Gaetz is currently under investigation for potential sex trafficking of a minor. His former associate Joel Greenberg recently pleaded guilty to a host of federal charges and agreed to cooperate with the investigation as part of his plea deal. Apparently, the one-time Seminole County politician has a lot to talk about: he asked a judge to move his sentencing date so that he could have more time to snitch.