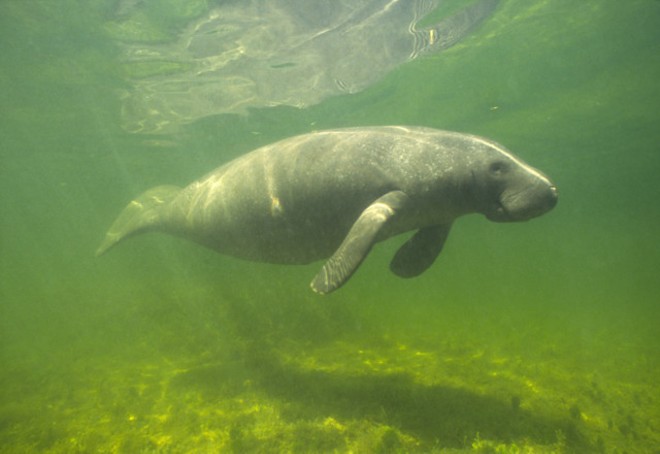 Florida’s manatees are dying at an unprecedented rate, sounding alarm bells for environmentalists.

The Florida Fish and Wildlife Commission has reported 841 manatees deaths so far in 2021, overshadowing the record set in 2013, when 830 died. Florida’s estimated total manatees population is 8,810. WTSP says 87 of those deaths happened in the Bay area.

With five months still left in 2021 and water pollution issues plaguing Florida and the Tampa Bay area in particular, environmentalists point out that the main cause of death of the threatened species stems from careless human behavior.

“It is distressing to see manatees being starved because we have done a poor job of protecting seagrass beds,” Gary Gibbons, Vice Chair of the Sierra Club Florida Chapter in Tampa Bay, tells Creative Loafing Tampa Bay.

Gibbons says that nutrient runoff from fertilized yards, agriculture, unregulated leaking septic tanks, and recreational horseback riding through grass flats throughout many areas of the state have led Florida to a tipping point that demands urgent attention from state and local governments.

This pollution, along with algal blooms, destroy sea grass that the Manatees need to survive. Without the grass, the manatees find themselves condemned to the slow death of starvation. On July 2, Max Chesnes of TCPalm posted a video showing an emaciated manatee in the process of dying.

An emaciated manatee, ribs jutting out of its sides, was filmed by a Titusville camper last week

819 manatees have died this year, many showing signs of starvation likely from seagrass loss

Boaters also pose a threat to manatees—63 have died so far this year due to watercraft collisions.

Manatees also headed for warm coastal waters early this year due to the cold winter, but this reasoning for their deaths is not as dire as the death of sea grass due to pollution, say environmentalists.

“Since record-keeping began in 1974, more than 41% of manatee deaths where the cause of death was identified were human-related – and almost 34% were due to watercraft collisions,” writes Save the Manatee, a group in Orlando dedicated to protecting the species.

Groups across Florida, from the group Miami Waterkeeper and Tampa Bay Waterkeeper consistently take action to protect water sources in Florida. In June, a consortium of environmental groups filed a lawsuit against Governor Ron DeSantis and HRK Holdings, the company responsible for the Piney Point spill.

In April, it was reported that the event could be ‘catastrophic’ for manatees. This story originally appeared at Creative Loafing Tampa Bay.