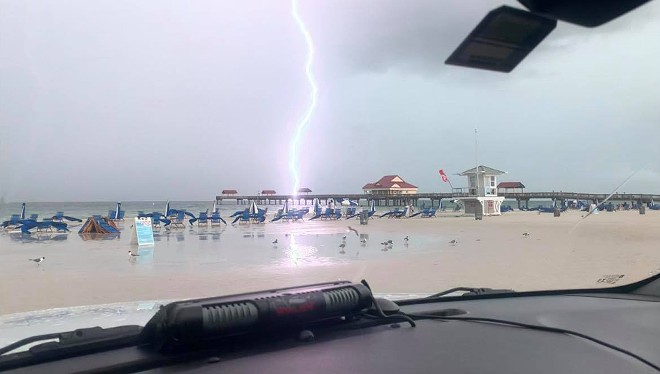 Every Floridian knows that if you can hear thunder, it’s time to leave the beach. But with new folks flooding into the state every single day, it never hurts to have a reminder. Clearwater Police captured photos of some astonishing lightning strikes on Wednesday, reporting that they had to warn several people away from the area.

The lightning struck several times all over the sand, but especially in the tanning area for the bathers.

In a Facebook post, the Clearwater Police Department said "an officer had to tell multiple people they shouldn't be on the beach for their own safety."

A surreal flash of lightning looked so bright and strong in the last picture posted by the police department. But of course, anything can happen in Florida.

As the pictures struck the internet, the comments went wild about the reportedly unbothered beachgoers.

"It's amazing how many people go out and walk when there's lightning in the area. It's like they think they're invincible," Facebook user Marcus Grayson commented.

Another brave commentator shared their own hard-won knowledge.

"At 5 years old, I picked up live wires and ended up with 3rd-degree burn and a healthy respect for electricity," Patricia McDaniel said. "I see clouds rolling in, even at a distance, I pack it up."

According to Florida State University, the averages 7 fatalities per year from lightning strikes, often leading the nation in.

All this is to say, be safe out there folks. If you can hear it, it can hit you.