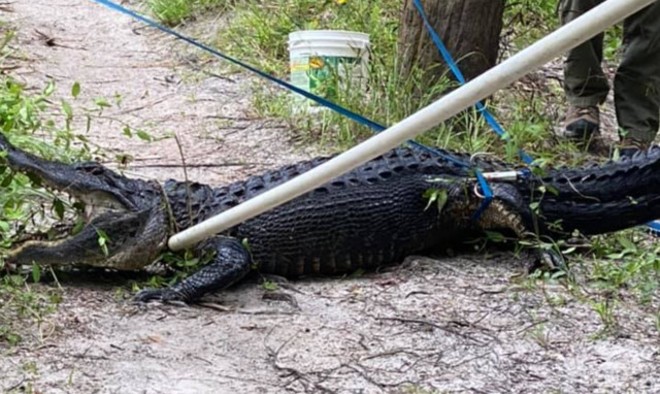 A Florida cyclist suffered severe injuries after falling into a body of water where a 9-foot female alligator was waiting earlier this week. He might have fared a lot worse, however, if a good Samaritan walking his dog nearby hadn't been so quick on his feet. Charlie Shannon fashioned a tourniquet out of his dog's leash and used it to staunch the bleeding of a bite wound on the man's leg.

Shannon was walking in Halpatiokee Park in Martin County when he heard a commotion nearby.

“Right before the Boy Scout camp I heard some yelling but I didn’t know what it was. I thought it was just kids or something, who knows, but then when I got there I saw it was a pretty serious situation," Shannon told WESH.


Shannon came across the victim, identified as 74-year-old Palm City resident Robert Bassett, as he was still being attacked by the startled alligator. Basset has been described by friends as an experienced cyclist who knows the trails well.

“The kid held on to me while I reached down and I was able to muscle him out of the water," Shannon said.

Shannon told the station that he was able to tie a tourniquet using his dog's leash and vague ideas of how to stop the bleeding.

“I just held it tight without trying to cut off the blood too much, because you have to be careful with that, I guess," Shannon said.

Bassett is currently in stable condition and the alligator has been relocated, per a report from TCPalm.