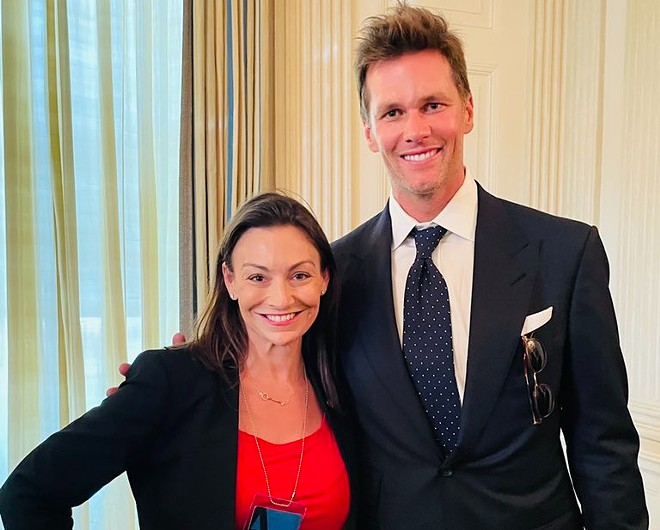 Florida Agriculture Commissioner Nikki Fried caught at least a snapshot worth of time with star quarterback Tom Brady as the Tampa Bay Buccaneers celebrated their Super Bowl victory this week at the White House.

Fried tweeted a photo of herself posing Tuesday with the much-taller Brady, adding a tagline about being with the National Football League’s “GOAT” (greatest of all time).

With the 🐐 at the @WhiteHouse. pic.twitter.com/3hgHI4yzNl


As might be expected, some progressive voices on social media weren’t kind to Fried, who is running to be the Democratic gubernatorial nominee.

“Can someone explain why Nikki Fried —- Democratic contender for the Governor's position in Florida —- is standing with a known Trump supporter?” said one of the first tweets back to Fried’s personal Twitter account.

“Sorry, Nikki, not something to be proud of. It won’t cost you my vote, but it will cost you some of my respect,” said another tweet.

A separate line of attack included, “Isn't he a Trump enabler? Tell him to start doing some good and telling people they need to be vaccinated.”

A few tried to be more humorous, such as, “Just like that Nikki has lost the @MiamiDolphins fans vote.”

Brady has acknowledged being a friend and golfing buddy of former President Donald Trump. A Trump “Make America Great Again” cap was once spotted in his locker. But Brady didn't go to the White House in 2017 after he led the New England Patriots to a Super Bowl victory, and he’s mostly remained apolitical on the advice of his supermodel wife Gisele Bündchen.

During Tuesday’s ceremony, Brady —-who has been showered with adoration from Gov. Ron DeSantis, a Trump ally and longtime Bucs fan —- appeared to take a veiled dig at Trump’s claims of election fraud.

Fox is considering a reality show starring Tom Brady
By Colin Wolf
Blogs
“Not a lot of people think that we could have won and, in fact, I think 40 percent of the people still don’t think we won," Brady said during the White House ceremony with President Joe Biden. "You understand that, Mr. President."

In response, Fox News on its website posted, “Tom Brady riffs veiled Trump jokes with Biden at Bucs' White House visit,” with a subhead of “Brady has been rumored to be a Trump supporter, but Tuesday's remarks might suggest otherwise.”