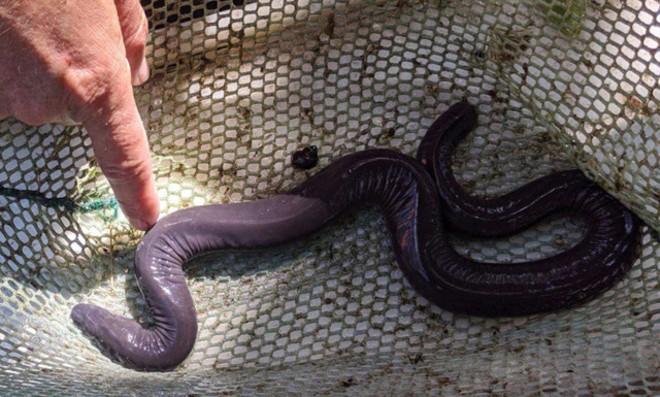 They aren’t technically snakes or penises, but scientists have now confirmed that Florida is currently home to the invasive “penis snake.”

According to a report for the Florida Museum of Natural History, recent DNA testing confirms that legless amphibians captured in Miami’s Tamiami Canal two years ago are, in fact, caecilians, otherwise known as penis snakes or rubber eels (they also aren't eels).

The specimens are the first known example of the species found in the U.S.

Native to Colombia and Venezuela, the eel-like animals are more properly called Typhlonectes natans, and are a type of caecilian, which can range in size from a few inches to 5 feet long, depending on the species.

Caecilians, which roughly translates to “blind ones” in Latin, have poor eyesight, but use a pair of sensory tentacles to help them find food. Little is known about Typhlonectes natans, but experts say they are a completely separate order of amphibians, distinct from frogs, toads, salamanders and newts, and prefer warm, slow-moving bodies of shallow fresh water with aquatic vegetation.

While they’re not much of a threat to humans, the Florida Museum of Natural History isn’t really sure how much of an impact these caecilians will have on native wildlife, other than that they hunt and scavenge for various kinds of small animals.

“Very little is known about these animals in the wild, but there’s nothing particularly dangerous about them, and they don’t appear to be serious predators,” said Coleman Sheehy, Florida Museum’s Herpetology Collection manager. “They’ll probably eat small animals and get eaten by larger ones. This could be just another non-native species in the South Florida mix.”

The first Florida Typhlonectes natans specimen, which was 2 feet long, was captured in 2019 in Miami’s C-4 Canal, near Miami International Airport. After it died in captivity, it was sent to the Florida Museum for DNA analysis.

Since then, Sheehy says he’s received several more specimens from the same canal. “At this point, we really don’t know enough to say whether caecilians are established in the C-4 Canal,” he said. “That’s what we want to find out.”

Experts aren’t exactly sure how they were introduced in Florida, but the Florida Museum of Natural History says Typhlonectes natans are often bred in captivity and are the most common caecilian in the pet trade, so there’s a strong chance they were released as discarded pets.

“This was not on my radar,” Sheehy added. “I didn’t think we’d one day find a caecilian in Florida. So, this was a huge surprise.”