With the announcement by Disney that thousands of Imagineering jobs would soon be heading to Central Florida, the region garnered international attention as a magnet for the amusement industry well beyond just hosting the world’s busiest theme parks. Hundreds of local companies play an outsized role in the industry, with amusement centers around the globe turning to Orlando’s hometown experts. At the forefront of this new wave is a local company looking to move beyond the coasters that have defined them for the past six years.

Since opening in 2014, Orlando-based Skyline Attractions has made a name for themselves with wild coaster concepts that seem straight out of Roller Coaster Tycoon.

The company is best known for its Crazy Couch, a kid-focused carnival-style flat ride that can now be found at entertainment centers across three continents. Another kid-focused flat ride, Strike-U-Up, combines the thrill of a launch tower with the classic sledgehammer carnival game. Besides the two flat rides, the company’s portfolio is made up exclusively of small footprint single rail-style roller coasters. Now the company is looking to double its portfolio offerings and move beyond the troubles of the past few years.

Skyline Attractions is readying to launch five new ride concepts, ranging from a family coaster to a thrill ride that will spin riders four stories into the air. The lineup also includes another thrill ride and two family attractions, including the company’s first interactive roller coaster.

Chris M. Gray has been with Skyline since its founding in 2014. The current VP is known for his scale models of roller coasters, two of which are now on display at SeaWorld Orlando. Gray recently spoke to the Orlando Weekly regarding Skyline’s future.

Over the past seven years, Skyline has made a name for itself with its coasters, something that Gray reassured us would stay front and center as the company looks to diversify. That connection to coasters dates back to the very foundation of the company. Gray said this focus comes from a comment made by an early client and lifelong friend.

“We probably had just announced the company two or three days before we had this meeting with a park up north. We walked into the manager’s office, and we've known the guy for years; since we were kids. We were telling him about the Strike-U-Up and how we would build this little game ride thing and be very innovative," he said.  "And he goes, ‘You shouldn't forget you’re roller coaster guys, that's your brand. You’re roller coaster guys, don't ever forget that.’ I think that that little thing stuck with us for a long time.”

Those engineering skills also provided the company with alternative sources of income during the pandemic, ultimately allowing the company to launch a sister company, Skyline ECS, for clients seeking engineering and creative services. During the pandemic, the group worked on projects ranging from a set of elevators to helping design a dump truck. That has provided some work for the company’s roughly dozen employees, but it hasn’t been enough to overshadow the problematic coasters that defined the company early on. 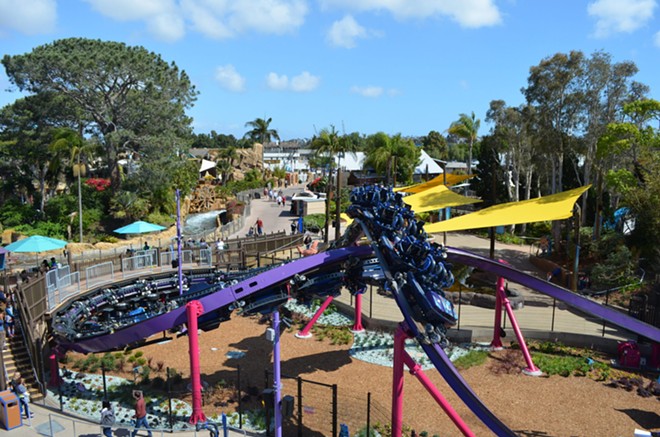 Among coaster enthusiasts, Skyline is best known for its two major coaster installations: Harley Quinn Crazy Coaster at Six Flags Discovery Kingdom and Tidal Twister at SeaWorld San Diego. The former lasted just three years before Six Flags confirmed earlier this year that they would not be reopening the attraction. Meanwhile, Tidal Twister is currently closed for maintenance. Within months of its opening, Tidal Twister saw two high-profile rescues and months of downtime. Gray acknowledges that with two coasters known for their issues, the company faces strong headwinds in convincing new clients to go with them.

“One of the last things that we had was Tidal Twister at SeaWorld. There was an issue with parts, parts we didn’t make. Ones that we just bought off of another company. They had a recall. That took us down for about six to eight weeks after two weeks of operation," he said. "And, you know, there wasn’t a whole lot we could do there except say, ‘Hey guys, we got to rush this and get it done as fast as possible.’ That was the biggest thing on Tidal Twister that we had. Unfortunately, it was coming off the heels of Harley Quinn.”

From its opening, there were criticisms and concerns regarding the Harley Quinn Crazy Coaster. Quinn was a “life lesson” for the company, according to Gray. But he also pointed the company’s ambitious designs and stated problems are to be expected when doing something new.

“Any time that somebody comes out with a prototype in any industry, including the amusement industry, the first one is never the easiest and best one," he said. "And, if you look at that, all the way through history, by the time you get to three and four of something in a product, it’s pretty much ironed out. And, I think we’ve definitely gotten there.”

Part of what has helped Skyline refine its current offerings while developing new ones has been the pandemic and the resulting slowdown in the amusement industry.

“COVID gave us a lot of time to really go in there, to look at stuff, and really iron it out,” explains Gray.

But the pandemic has also meant new delays in reopening Tidal Twister with the long COVID-related downtime as part of why the ongoing rehab is taking so long. SeaWorld’s lack of internal maintenance crews is also part of the issue with, according to Gray, Skyline sending their own team to assist with the maintenance. Skyline has also mentioned their assistance with ensuring Tidal Twister reopens in a recent post on Instagram. Once it does reopen, Tidal Twister will have multiple improved mechanics. It will also serve as a marketing tool for Skyline, with them encouraging potential buyers to check out the San Diego coaster in person.

The addition of a functioning California-based coaster may help with international sales, something that, so far, Skyline has been reluctant to focus on. That’s starting to change, with interesting from multiple potential clients in Europe and the Middle East approaching the company within the past few weeks. One of the main reasons behind this recent uptick in interest is Skyline’s newly revamped website. The new website is also how Skyline announced its upcoming new attractions.

Gray hopes that the expanding portfolio will make Skyline a go-to vendor for those amusement parks and entertainment centers looking for something different. But first, clients need to be ready to move beyond the pandemic. “I haven't seen anybody pull any big triggers yet for us, but I've heard about other companies getting lucky on a few things already. So, you know, it seems like it is only up and up. It's just a matter of how fast that's going to go.”

Details on Skyline’s five new attraction concepts are expected to be announced in the coming weeks.