When scaffolding began rising around Splash Mountain in recent weeks, it renewed interest in the upcoming reimagining of the classic attraction. Last year’s announcement by Disney that the problematic Song of the South theme would be removed, replaced by the Princess and the Frog, came as a welcome surprise after pushes to see the change had existed for years.

The move was widely lauded as an indication of the type of decisions necessary to ensure theme parks become more welcoming places.

Within weeks of the announcement, there were already indications that things at Disney may not be as set in stone as they had let on. The first clue that this project was unlike previous ones was the lack of concept art released with the announcement. With few details on what to expect on the ten-minute-long log flume attraction nor when it was scheduled to debut, speculation began that maybe the attraction had been greenlit before all aspects of it had been decided. Also missing from the announcement were any details of what would happen to the Tokyo version. 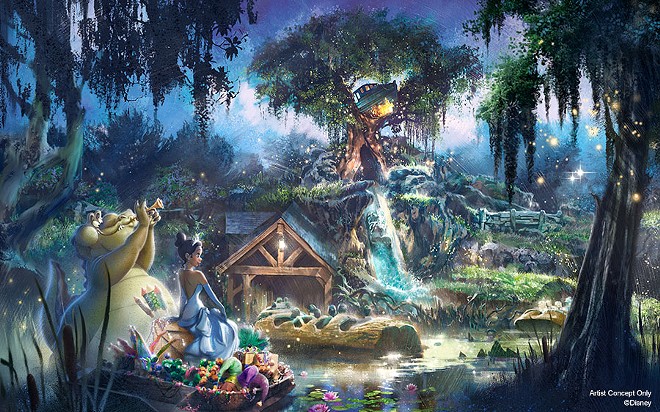 In a wide-reaching post on the WDW Forums, The Visionary Soul, a noted insider known for their accurate reporting on previous projects, laid out details on various Disney Parks projects, including Splash Mountain. In the post, Visionary Soul notes the Princess and the Frog redo had been rejected by the Oriental Land Company, the owners of Tokyo Disneyland. This meant the ability to duplicate set pieces for both Tokyo and Orlando was no longer an option unless Disney themselves were to pay for the Tokyo update.

Related As Disney works to address racism in park properties, fans speak up about the lack of diversity in company leadership

As Disney works to address racism in park properties, fans speak up about the lack of diversity in company leadership
By Ken Storey
Blogs

Other set pieces were to be reskinned existing animatronics, with some scenes nearly identical to existing ones. It’s unclear how many scenes on the new ride will mirror existing ones, but the final riverboat scene has been all but confirmed to be staying, albeit with an update that includes adding Princess Tiana.

Months went by with no details on the project being shared by Disney or trustworthy insiders. Earlier this summer, rumors began rising that the project was facing a budget crisis. One of the first to report on this was Brayden Holness of Mickey Views. In his reporting, Holness warned that he had received word that it features just a fraction of the 68 animatronics that the Orlando version currently has.

As concern grew among the fan community regarding the project's status, Disney broke their months long silence with an update on their official blog. They shared a second piece of concept art and stated the redo will feature “next-level technology.” In a corresponding video shared with the blog post, Charita Carter, Senior Producer for Walt Disney Imagineering and the lead on the Splash Mountain redo, mentioned, “the way we’re approaching our audio-animatronic figures would be an example of how we’re looking to advance the storytelling and really just kind of change the game.”

Related Disney has promised greater diversity. These Imagineers are charged with making sure that happens

Disney has promised greater diversity. These Imagineers are charged with making sure that happens
By Ken Storey
Blogs

Soon after the update by Disney, which again remained silent on Tokyo’s version of the attraction, Holness took to YouTube to point out that Disney had used similar language on other recent attractions which feature a limited number of animatronics, such as Na’vi River Journey, which includes just one animatronic and otherwise relies on projections and digital screens.

The rumored move to limit the investment on this highly publicized reimagining aligns with other recent actions by Disney, which seems to be relying on the Parks and Resorts to help prop up other divisions of the company. Disney CEO Bob Chapek has been clear about focusing much of his energy on the Direct-To-Consumer segment. That has resulted in Disney+, Disney’s flagship streaming service, seeing massive gains in subscribers over the past 18 months. But Disney's streaming services remain at a loss due to the high production cost for the hundreds of hours of original content that Disney has rolled out across its services. A reorganization of the media side of the company last year should help streamline some of those issues and reiterates Disney's focus on streaming as a primary driver of consumer engagement moving forward.

That has seemingly come at the expense of the parks, which have seen little in the way of new investments despite multiple new attractions now readying to debut as part of WDW’s 50th Anniversary celebration. Instead of increasing capacity with the introduction of new attractions, Disney has kept its focus on developing ways to optimize guest spending via reliance on apps and in-park upgrades, including new paid FastPass style offerings as part of the Genie+ app.

In August, Melissa Valiquette, vice president of Magic Kingdom, spoke to the Orlando Sentinel on their Theme Park Rangers podcast. In it, she stated decisions regarding music and animatronics for Splash Mountain have been made, but the project will take years to complete, and she hopes “guests will put a little bit of trust in us for a bit because we promise to not let you down.”

Orlando Weekly has reached out to Disney for clarification on the project and its multiple rumored issues. Disney has yet to respond.

As is common with theme park projects, Disney hasn’t commented on how many animatronics to expect in the new version of Splash Mountain nor how much they've budgeted for the project. But if the rumors over the budget for the project are correct, it may be wise to begin tempering expectations. At least regarding her new ride, Disney seems to be giving its first Black princess anything but to the Royal Treatment.